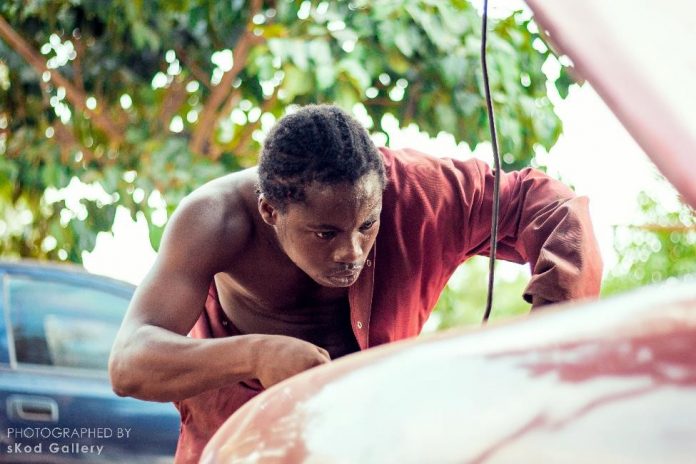 Ever seen a surgeon at work?

Well, I have — courtesy enough episodes of Grey’s Anatomy — and, even from behind a screen, I could tell it’s pretty awesome: the bright lights, the greens/blues, the squeaky clean environs, hands adroitly operating delicate body parts, some dramatic classical music playing in the background, etc.

Well, yes, I couldn’t have thought of a cooler job — until I met the auto mechanic (or ‘fitter’, as we call them in Ghana). He is a ‘surgeon’, too, you know — only without the gloves, artificial illumination and all the sanitary stuff. Those aside, there are certain parallels to be drawn: coveralls in place of scrubs, oil and lube spills where you’d find bloodstains in the hospital theater, protective eyewear and footwear, and Shatta Wale blasting some wild dancehall vibes out of a stereo in the corner.

You don’t get to enjoy the music, though, as it’s so very often interspersed by the clinking sound of bolts screwing nuts and of metal striking metal — that’s noise, obviously. But after all that tweaking and tinkering comes the sound of a dead engine brought back to life, humming, however croaky — now that’s real music, at least to the ears of the sweaty auto mechanic.

Truth be told, the auto mechanic’s shop isn’t the most orderly place, and it’s not just the aforementioned cacophony which highlights that fact; visually and through the nostrils, too, that much can be perceived.

Also, the pieces of metal — scrap or whole — strewn all over the place?

And, oh, can you smell the many odors — toxic, according to one study — reeking from used chemicals?

Such assault on the senses may seem too much for one place, but our auto mechanic friend would have you know that it’s from such chaos that order — the sort which gets ‘hopeless’ vehicles resurrected — emerges, lubricating the pockets of this miracle-working fellow whose likeness Koduah Aquila captures in this week’s Photo-Blog images.

Traditionally, given the mess he gets himself stained with — literally — the work of an auto mechanic hasn’t been regarded as the most esteemed vocation out there — on the streets of Ghana, to illustrate, ‘as filthy as a fitter’ is one of the more popular insults you’d hear thrown about — but, with government’s increased emphasis on technology and technical education, it no longer is an alternative solely for drop-outs and ne’er-do-wells. From Suame — location of Ghana’s largest industrialized zone where thousands are employed, mostly as auto mechanics — to all the other garages (a.k.a. ‘magazines’) scattered around the country, even the more formally educated would aspire to this brand of artisanship.

For now, however, society has the surgeon and the auto mechanic at different ends of the ladder of professional prestige, ranking the former higher. Perhaps, though, we’ve got the order all wrong as, in some ways, the latter renders equally vital and even superior service.

See, you might never need to undergo surgery in your lifetime, but you’d surely call up an auto mechanic someday — or the driver of the trotro/taxi you board each day would. Then again, even if techniques of surgery do get ever more sophisticated, human anatomy never evolves; cars do, however, with each year seeing the introduction of an entire fleet of new models across a great many brands, and the auto mechanic has to adapt accordingly to keep up with the times. Needless to say, the quality of the auto mechanic’s work impacts lives as much as — or even more than — the surgeon’s does.

Regardless of the generation or demands, though, the auto mechanic would do whatever it takes — stand, sit, stoop, lie supine or prone, even bend over backwards — just to get the required ‘surgery’ done.

Oh, don’t you just love him!