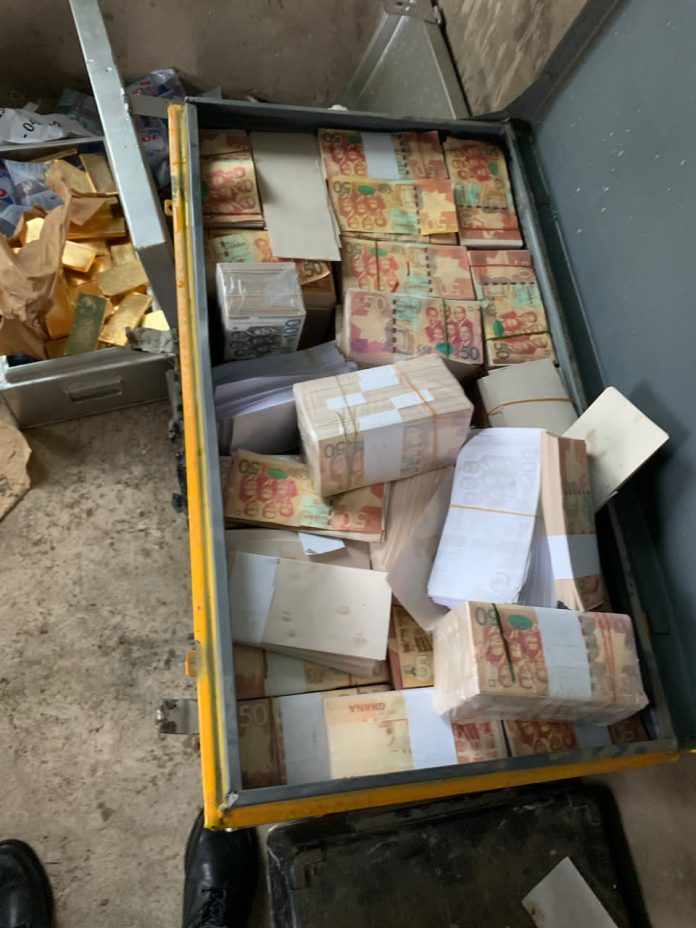 An intelligence-led operation has led to the arrest of three male adults suspected to have murdered a man believed to have falling victim of a fake money doubling syndicate.

An incident report widely published online indicated that the body of the victim had been buried in at a location near Adjen Kotoku in Accra and needed police action.

A team of armed policemen rushed to the scene at a gated plot of land that has two single rooms built on it and roofed. Three suspects who attempted to escape from the scene were arrested after police fired to deflate two tires of their ash Toyota Corolla vehicle with registration number GW 3409-19.

“A search in the rooms led to the retrieval 8 large metallic boxes and 15 small metallic boxes containing fake 200,100, 50 cedi notes and 100 US dollars notes wrapped together with white papers in bundles. One Money printing machine and pieces gold like metals suspected to be fake gold from the rooms”, the police report further revealed.

The police have also been detailing how the body of the victim in his early forties was exhumed during the search.

“The team extended enquiries to the back of the two rooms and found a trip of heaped sand and based on suspicion a payloader machine was engaged to relocate the heaped sand for investigations.

In the course of doing so, the body of a male adult believed to be in his forties was exhumed dead”, the police said.

The body of the deceased has been deposited at the Police Hospital for preservation awaiting identification and autopsy.

The three suspects have been detained at the Greater Regional Police Headquarters to assist investigations.

It is gathered that said the retrieved exhibits together with the Toyota Corolla vehicle are in the custody of Kotoku Police to be sent to Regional Headquarters later (.)Regional CID, Accra in charge case(.)

Council of State chairman requested to call Tongraan to order

End strike, our doors are opened for resolution – Health Committee...