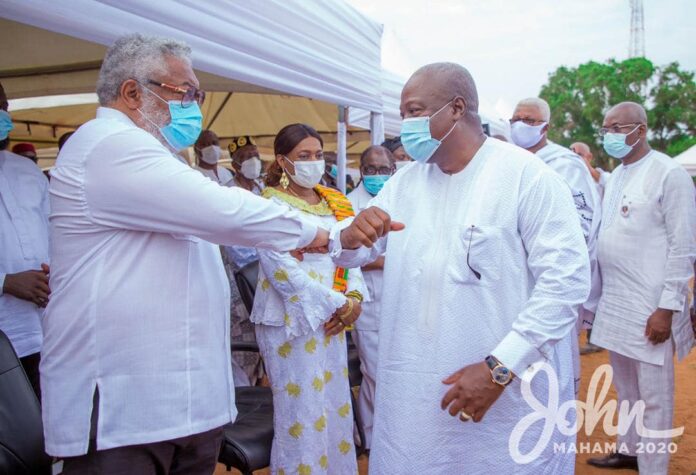 The presidential candidate of National Democratic Congress (NDC) John Dramani Mahama will chair an urgent meeting of the Political Committee of the party over the sudden demise of former President Jerry John Rawlings.

The meeting is to consider the next steps towards joining the family, government and the people of Ghana to honour the memory of former President Rawlings, the founder of the NDC.

Former President Rawlings died on Thursday, 12 November 2020, at the Korle-Bu Teaching Hospital, where he was receiving treatment, after a short illness.

“Ghana has lost a colossus and his fond memories will forever live,” Vice President Dr. Mahamudu Bawumia said in a statement.

Mahama arrived in Accra Thursday night, following the suspension of his campaign in the Ashanti Region on hearing the news of the death of the founder of the NDC.

President Rawlings was the Chairman of the Armed Forces Revolutionary Council (AFRC), became Chairman of the Provisional National Defence Council (PNDC) in 1981, founded the NDC, and was the first President of the Fourth Republic.

“His fight for social justice and the principles of probity and accountability led to major interventions that among others ended coup d’etats in Ghana,” Mahama said in a Facebook post Thursday.

“He is the Founder of our 4th Republic, which remains easily, the longest period of stable, democratic governance in the history of our beloved country, Ghana,” he added. “President Jerry John Rawlings is no longer with us. Ghana has lost an icon.”

“Now, more than ever, we have a sacred duty to uphold and defend the values of the 4th Republic that President Rawlings held so dear – peace, democracy, probity and accountability, respect for human rights, freedom of the press, tolerance and inclusion. In doing this, we honour the man who brought us the gift of a free and democratic society,” Mahama said.

At this time of deep sorrow, Lordina and I send our heartfelt condolences to HE Nana Konadu Agyeman-Rawlings, the children, immediate family, the countless number of his former colleagues, and the people of Ghana.https://t.co/68rXQY7pvB

President Akufo-Addo  directed all national flags to fly at half-mast for the next seven days in all parts of the country in honour of late former President Jerry John Rawlings.

He further added that “the Vice President and I have suspended our political campaigns for the same period.”

Show what you’ve done with the monies you’ve borrowed – ...