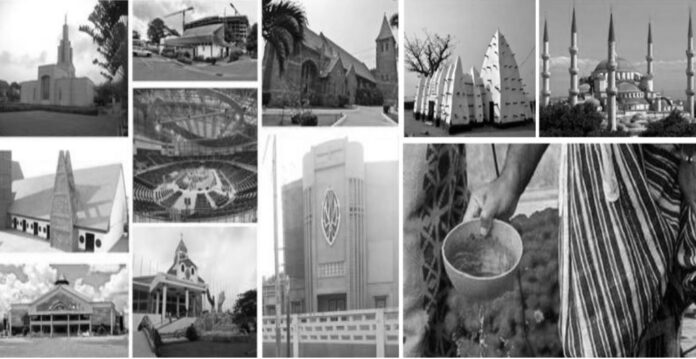 Some two or so weeks ago, a cousin of Nana Addo-Dankwa Akufo-Addo, who also doubles up as minister for finance of the sovereign state of Ghana, by name Ken Ofori-Atta (and how else could one put it?) gave Ghanaians one of the most brazen, unkindest and unconstitutional cuts of them all since the beginning of the 4th Republic. He looked us all directly in our faces and announced, without any shred of respect, a purely private religious initiative in our budget review, for which he said he would expect GhC100 each month from each Ghanaian. Please ignore the allusion to voluntary contributions, it is only the sophistry of people who imagine themselves as smarter than us all. Yea, money is of no object to them, so he can flippantly throw this GhC100 swindle out there and expect we would all smilingly reach out for our cheque books, momos or dash off to ATMs to satisfy this self-serving nonsense! Some may, and I say good luck to them, but that call had no business emanating from the floor of our parliament and our parliamentarians did not immediately throw it out.

Mr. Ofori Atta had no empathy/sympathy for the people whose “public purse” he has been charged to keep. If he had, he would have known what that same amount of money meant to us the lesser endowed. If this is not fraud, what else is? Some call it “sakawa”, others, “419” and if you want us to delve into history, “kalabule”. This same Ofori Atta found it within his brief as the chief finance officer of my country with diverse faiths, to travel to Israel to ask this Jewish non-Christian state to contribute to the construction of the so called “national” cathedral of Ghana! Why this obsession? Is it because the Ghanaian Rasputin they have been bowing to has asked them, in cabalistic fashion, to construct such a temple of worship to assure their perpetual stay in political power? Honest, I don’t know, but it is a speculation that has been forced on Ghanaians and gaining ground…

On this so called “national” cathedral, with all its divisiveness, disunity, unconstitutional insult and discrimination, they seem to be getting away with it. Where are the prelates with a conscience; academics and intellectuals with a conscience; traditional rulers with a conscience; a legislature with a conscience; a media with a conscience; civil society with a conscience, and on and on? So nothing really matters any more in Ghana, for as long as a bullying politician has been invested with an electoral outcome, he/she becomes an untouchable. This is not democracy! It will not pass muster in any civilized democracy, but here we are, subject to the insults of those who would use an election outcome as the basis for proselytizing their faith. The constitution that set the stage for elections does not only allow the independence in the freedom of plural worship but also makes the secular independence of state/government paramount. A Muslim head of state would have no right of making a mosque the central focus of our nationhood nor indeed, should a Christian head of state make a Christian cathedral the

“priority of priorities” of our nationhood. Both are unacceptable, pure and simple! But today, mother Ghana is being raped in the name of religion and we are acquiescent. It being a partisan political ploy, we can see in the bigoted way the political party elite in power is pushing for its construction. I do not hear of similar enthusiasm when the more pressing needs of our country are mentioned.

But I have a simple challenge for Mr. Akufo-Addo and Alhaji Dr. Bawumia and it has nothing to do with the fraudulent equalization of the mosque at Kawu Kudi Junction with their cathedral. It is such an offensive notion to argue that because of the mosque, therefore a cathedral.  When they made much ado about the so called Ministry of Zongo Affairs or whatever, what exactly did they intend to achieve with it? Let us not forget that the Zongos are home to mainly Muslims of Northern Ghanaian extraction with a diverse collection of ECOWAS sub-regional types. After garnering what votes they could in Election 2020, they shamefully abandoned it and now their apologists would dare attempt to use a grand mosque in that part of town to equalize with their cathedral! A sharp slap to the Zongos!

Here is the challenge: Friday is only a few days away, Muslims all over the world, almost 2 billion of them, would be observing the jumma’a prayers. There could be no better platform than that for Akufo-Addo and Bawumia to utilize for a cathedral fundraising programme. Come on, on Friday, go to the Kawo Kudi junction grand mosque and after prayers, hold a cathedral fundraising rally! If this sounds ludicrous and ridiculous, this is because the cathedral “project” is ludicrous and ridiculous due to its very sectarian underpinnings. On the other hand, try this: use the Friday prayer session to campaign for awareness in some issue, like girl child education, electricity conservation, environmental protection and the hundreds of many other socially relevant national and unifying concerns. It would be appropriate. You don’t have to say it, but that would receive the immediate and eternal favour of our God, the God that is neither Christian (Mormon, Seventh Day Adventist, Assemblies of God, Evangelical, Catholic, Protestant, etc.), Buddhist, Muslim (Sunni, Shia, Ahmadi, Isma’ili, etc.), Druze, Judaist, Zoroastrian, Jain, Hindu, Sikh, Baha’i, Buddhist, Confucian, Shinto, Taoist, and the many other faiths, too numerous to mention here. Just choose one and the world will still spin on its axis, rotate around the sun and speed along with the sun in the galaxy.

Or since you are so insistent on your God, if you want to, we can institute a public debate on which is the one true religion to belong to. Aha, I can imagine you wince at that. It would tear us apart into shreds, and nobody wants that. So let us calm down on this bigoted proselytising in our political space…

Got my drift? Your “national” cathedral is nothing but “bah, humbug”! In other words, bunkum! And by the way, we have a huge number of compatriots who do not believe in these things. Their lives also matter, or…And finally, for heaven’s sake, please lay your hands off our national rosewood – the shipment that was seized from smugglers, which I hear you are donating to your cathedral. They belong to all of us, so, to sequester them for your cathedral would be tantamount to thievery – stealing from the Ghanaian people. A case for a future Special Prosecutor!

Thank you in the service of a caring, gentle and thrifty nation devoid of political hubris and religious bigotry….

Tsatsu loses case to stop Amewu from going to Parliament