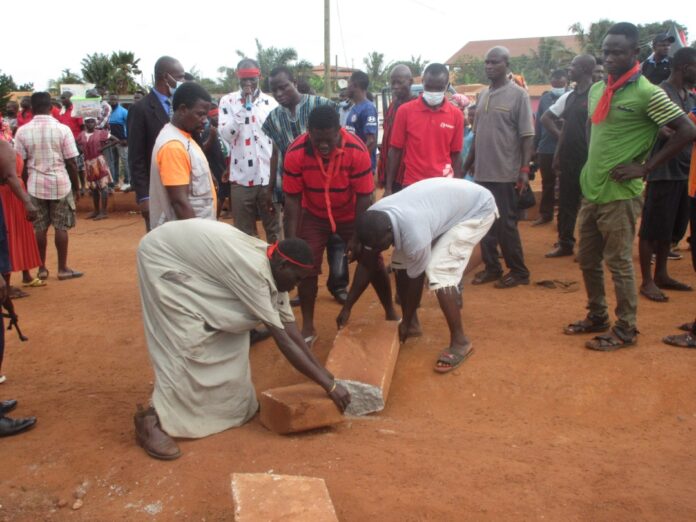 Residents in some 10 communities in the Atwima Kwanwoma District of the Ashanti Region have launched a desperate appeal to the government to fix bad roads in the area.

The residents say they are yet to see benefits of their loyalty after voting massively for the governing New Patriotic Party.

One of them is 15-year-old Dominic Gyasi. He explains why he had to skip school to join the protest.

“Look at this dusty road. This is the trouble I have to go through everyday and it is affecting our academic work”, the placard-wielding boy told dailymailgh.com.

“We only see the contractor when Akufo-Addo is coming here and he withdraws from site when he exits. It’s time to fix it”, he said.

“I am the chairman for the NPP in one of the polling stations in this area, but it seems we have been giving our votes to the NPP since 1992. Yesterday, the president went to speak to Bolgatanga where the NPP’s hasn’t done well in terms of votes and promised to construct their road from Bolga to Bawku”, another said.

The one-hour protest stranded commuters plying the road to their various destinations.

“They are saying they are demonstrating”, said 34-year-old Bright Quarshie. But I don’t know any other way to get home and one of my children is very sick at home and I need to get medicine or take him to the hospital”.

Police were later called in to disperse the crowd. The road was eventually cleared to traffic.

Ashanti will not be shortchanged

This development follows assurances by government to inhabitants of the Ashanti Region to improve road infrastructure in the ruling party’s stronghold.

At a press briefing earlier this year Minister for Roads and Highways Kwasi Amoako-Attah said:”I want to assure the people of this region that developmental programmes in Ghana as a whole will be looked at in its entirety and every region will get its fair share of the national cake, but Ashanti Region will never be shortchanged and your interest will not be toyed with as far as the road sector is concerned” .

He announced at the media engagement that five more interchanges will be constructed in the region.