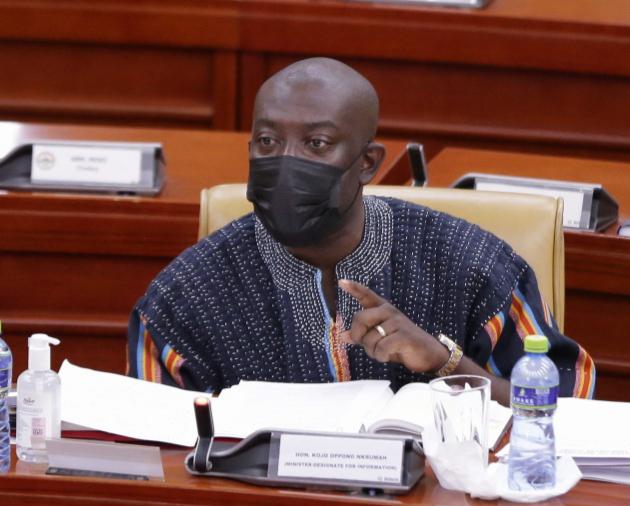 Information Minister Designate Kojo Oppong Nkrumah has provided detailed update on the progress of the Right to Information (RTI) law which took effect in 2020.

According to him, 455 out of 526 RTI officers have been trained to occupy Ministries, Departments and Agencies (MDAs) as part of continuous efforts to equip officers to make the implementation of the RTI successful and to ensure efficient compliance of the law by public institutions

Taking his turn at the Appointments Committee on Thursday February, 2021, the Ofoase Ayirebi legislator emphasized that the training of the RTI officers was meant to educate them on the RTI Act 989 in order to equip them on the legalities of the law and how they are to operate within the framers of the law.

He said, “specifically on RTI, if I may have some liberty Mr. Chairman to speak on it briefly, the law assented to in 2019 took effect in 2020. We have done a number of things. First we have created the RTI division at the Information Ministry. We have trained and deployed RTI officers to Ministries, Departments and Agencies across the country as well as MMDAs and then independent constitutional bodies. We had a road map that record 26 different activities to execute for the implementation of RTI.

“Mr. Chairman, I am happy to inform the committee that currently about 18 of those activities have been completed, 5 are ongoing are not due to be executed yet. In terms of training and work, for example Ministries, Departments and Agencies out of 526 officers that we need to train, we have trained 455 who are on the job today responding to RTI requests that are coming in,” he added

Providing updates on the number of RTI officers trained across all districts in the country, the Minister Designate for Information noted that 483 out of 552 personnel have been trained so far. He further explained that several requests for information have been received with majority of them granted access.

“Across the districts, out of 552 that we are suppose train, we have trained 483 and they are working today. At the end of 2020, the RTI units across government have received 56 requests, have responded to all of them granting access to 44 of them, about 2 of them were transferred, 4 of them were referred, 1 application was withdrawn, 1 was denied and is now on application for review,” he said.

Over 600 confirmed cases of COVID-19 in Africa