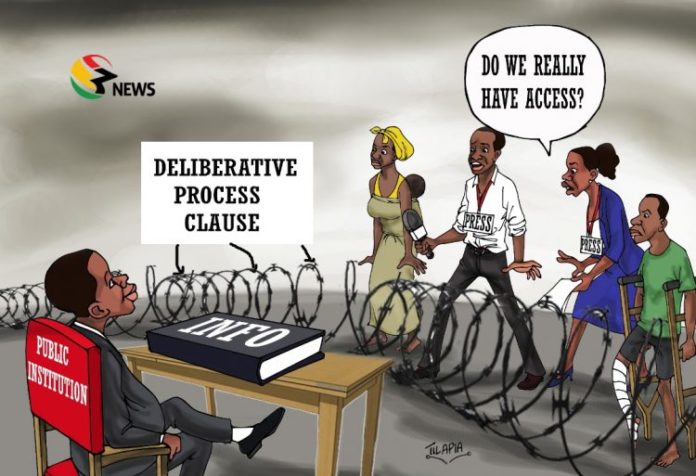 It must have been a great relief for many, especially media practitioners, to have finally heard the announcement by the government, through the Ministry for Information, that the much-anticipated Right to Information Act, 2019 (Act 989) is now effective.

“Long overdue!”, one would say, but as to what that exactly means to the ordinary Ghanaian has been captured in my first article in this series.

Right to Information Act effective today: What does it mean?

Those who literally broke their backs and risked their lives to campaign relentlessly and advocate vigorously to see the RTI come to pass must have a certain sense of fulfilment – at least to have seen their toils pay off. They certainly deserve a pat on their backs.

And if not for anything at all, it’s been a protracted continuous tortuous journey of seeking to scale the hurdle that stood in the way of the right to information as  enshrined in Article 21 (1)(f) of the 1992 constitution – there needed to be an act to spell out the processes and procedures in enjoying that right.

“All persons shall have the right to information, subject to such qualifications and laws as are necessary in a democratic society”-1992 constitution.

Rightfully so, the Information Ministry in making the announcement spelt out the steps involved for one to access information from any public office as contained in sections 18-22 of the Act.

The Ministry reiterated an application would take a maximum of 14 days to get a response from the institution and a minimum of 48 hours depending on the kind of information requested. Sounds pretty simple and straight forward, right? It appears so.

On the face of it, it may seem the floodgates for the acquisition and reception of information have been opened for Ghanaians to be able to hold public officers accountable when it matters, but a critical look at the 86-sectional Act may suggest otherwise.

I doubt anyone anticipated that the RTI Act would come out to have such limitations that will restrict them from accessing information at the presidency, relating to cabinet and other core government machinery institutions.

Of course, the constitutional provision in Article 21 (1)(f) gives a clear indication that the enjoyment of this right is not unfettered so one would reasonably expect some limitations of some sort but certainly not as many as are contained in sections 5 – 17 of the Act.

Soon after the two-decade long advocacy gave rise to the passage of the Right to Information Bill into law by the 7th Parliament of the 4th Republic, celebrated cartoonist, Tilapia of 3news.com made a cartoon which many will later appreciate to be the most profound.

The cartoon simply summarised the entire law into that one caricature; one I personally captioned “‘clause’ the barrier if you can” because of the inherent clauses (one would have to cross) in the law that limits the right of access.

To have as many as ‘13 plus’ categories of information ousted from the remit of the RTI and having these targeted at core government machinery begs the question what the purpose of the RTI Act is. It is however worthy of note that in a few specific instances, some information under the exempted categories may be  accessed.

I quite remember putting out a snapshot of the exempted information in the RTI Act and the most immediate reaction I got was people questioning if there would be any information left to be accessed. Admittedly, that is a fair question to  ask and a fear to express but that should not deter people from taking advantage of the law to enjoy their right. The Ministry itself has admitted there may be some challenges but said it is working to deal with them as and when they arise.

The fear of being denied information which is deemed to be under exempt information may be scary. It could even be scarier if one is denied information on the grounds that their application is “manifestly frivolous and vexatious” as provided for in Section 27 of the Act. The bigger question in such an instance will be “what is the measure of frivolity and vexation?”.

We will look at that in subsequent articles, until then, walk into any public institution (Ministries for now) and apply for information.

What appears to be the good news in all of this are the provisions of the Act that allow an applicant who is denied information to seek a review of the decision or appeal same, at far as going to the High Court.

By P.D Wedam|The writer is a multimedia journalist with the Media General Group and a law student; Kindly send feedback, suggestions and questions to pwaberidenis@gmail.com or engage @pdwedam.