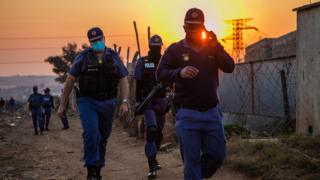 A South African court has found some coronavirus lockdown regulations imposed by the government “unconstitutional and invalid”.

The judge picked out rules around funerals, informal workers and amount of exercise as “irrational”.

The government was given14 days to overhaul the regulations.

South Africa initially had some of the world’s most restrictive lockdown measures. The country has 35,812 confirmed cases and 755 deaths.

What did the judge say?
The high court in the capital, Pretoria, ruled that the regulations were not connected to slowing the rate of infection or limiting its spread.

“The regulations… in a substantial number of instances are not rationally connected to the objectives of slowing the rate of infection or limiting the spread thereof,” the written judgement read.

Judge Norman Davis argued it was wrong to allow people to travel to attend funerals but not to earn their livelihoods by street trading, as many South Africans do.

The government said it will review the regulations but in the meantime the current lockdown regulations will apply.

Police have opened almost 230,000 cases for violating lockdown regulations since the beginning of lockdown on 26 March, according to the Police Minister Bheki Cele.

Contraventions have included breaches of the ban on alcohol and cigarette trade, failure to stay at home and gathering illegally.

On Wednesday Health Minister Zweli Mkhize warned on state TV that coronavirus was a bigger threat now than at the start of the lockdown, and he called on people to remain vigilant as cases continue to rise.

What are the implcations of the ruling?
By Nomsa Maseko, BBC News, Johannesburg

The South African government has been criticised over some its lockdown regulations, many describing them as bizarre and arbitrary because it banned things like the sale of cooked food, tobacco products, alcohol and even prescribed what items of clothing people were allowed to buy.

At one point during level four of the lockdown, short-sleeved T-shirts became contraband as retailers were not allowed to sell them.

This ruling has serious implications about those who were imprisoned or fined for not complying with lockdown regulations. Will the fines stay in place or will they be overturned by the courts?

While all of this plays out, South Africa is gearing up for confusion or even people outright ignoring lockdown rules – some local media are not making it clear that the government has two weeks to rectify the regulations.

There is also a possibility that the government will appeal against the court ruling.

Meanwhile, the opposition Democratic Alliance is also taking the government to the constitutional court, arguing that the Disaster Management Act legislation which governs South Africa’s lockdown be ruled unconstitutional.

South Africa has eased its lockdown restrictions and this week alcohol sales resumed following a two-month ban – but only for home consumption.

But all sales of cigarettes remain outlawed.

Gatherings, except for work, religious ceremonies and funerals, are still banned.

Travel between provinces is also prohibited, and international flights are cancelled except for those repatriating citizens.