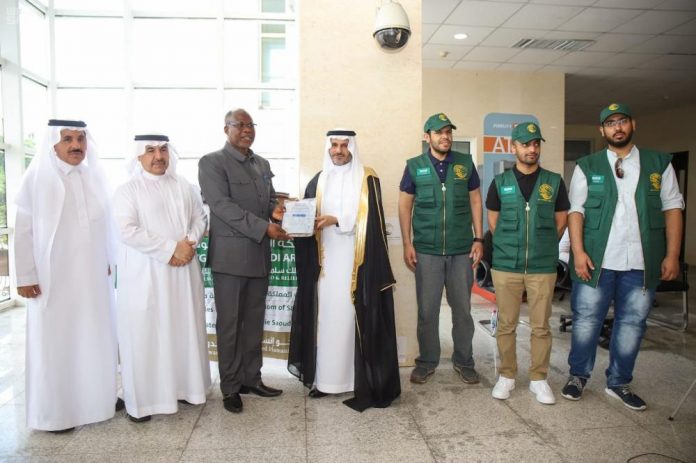 Saudi Arabia has gifted more than 100 tons of dates to Bangladesh and Ghana on Wednesday.

A team from King Salman Humanitarian Aid and Relief Center (KSrelief) on Wednesday handed over 50 tons of dates to the West African nation as a gift from Saudi Arabia.

Deputy Minister of Foreign Affairs and Regional Integration of Ghana Mohammad Tijani, Saudi Ambassador to Ghana Mishaal Hamdan Al-Ruqi and representatives of the Saudi Ministry of the Finance and the KSrelief were present at the handover ceremony in Accra.

Another KSrelief team handed over here 50 tons of dates to Bangladesh in the presence of a number of officials in Dhaka.

The assistance came within the humanitarian role being played by the Kingdom to support countries around the world.

On Tuesday, KSrelief distributed 330 food baskets to displaced and affected people in Al-Mudhaffar and Salh districts of Taiz governorate in Yemen.

The humanitarian aid came within Saudi Arabia’s constant support for the Yemeni people.

Meanwhile, KSrelief Supervisor General Dr. Abdullah Al-Rabeeah, who is also an advisor to the Royal Court, received in Riyadh on Wednesday Azerbaijan’s Ambassador to the Kingdom Shahin Abdullaye.

During the meeting, they discussed issues of mutual interest related to humanitarian and relief affairs between KSrelief and Azerbaijan.

The ambassador praised the distinguished role of the center in carrying out relief work in a professional manner and its lofty missions in supporting affected countries and peoples around the world, especially Azerbaijan.

He expressed his sincere thanks to the Kingdom, which in the past provided over $100 million in humanitarian and development aid to Azerbaijan, including shelter and humanitarian logistics, support for the education sector and rehabilitation of drinking water and sanitation systems.