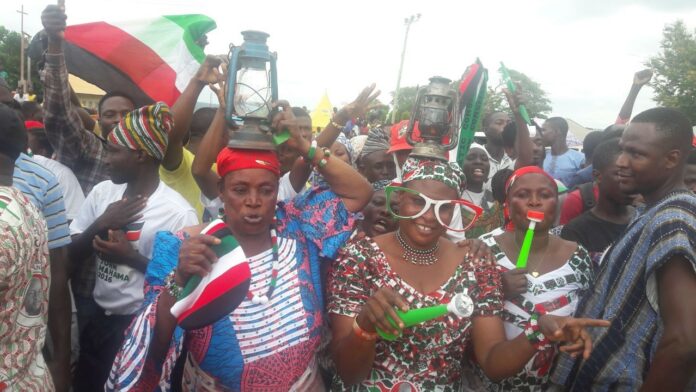 Below is an excerpt from my book “Ahwene Pa Nkasa. Standing with JDM”, published August 28 2020. It is a compilation of some of my reminiscences of and reflections on a privileged proximity to the 4th president of the 4th Republic of Ghana John Dramani Mahama (JDM). With 331 pages, it has 67 chapters. Chapter 22 has the title above. On Monday, December 7 2020, JDM goes to the polls to secure his 2nd term

It is an apt metaphor: Searching for John Dramani Mahama with lanterns in the bright glare of sunlight. For some, it is a longing to find the valuable object they allowed to slip through their fingers; for others, it is the remorse of maligning a good man; for yet others it is to welcome back the man to once again lead the way.

As the search continues, I am asking, where did JM go wrong – and

of course, right? Too often we forget of the right and dwell on the wrong.

On a trip from Windhoek to N’Djamena, the Chadian capital, for a conference in 2015, I had to make a connecting flight through Addis Ababa where I ran into a top official in the NDC hierarchy, also waiting to connect somewhere. We got to talking. His tone, I noticed, was almost a death wish. He paraded a litany of woes – not once accepting responsibility for any of them, nor proffering any solutions, but looking for a head to dump the weight on. He may or may not have intended it as a message to JM, but I got his drift. It was for me one of the first drips that would end in the verdict of Election 2016.

It was not as if JM was not fulfilling his constitutional and electoral responsibilities – that never came up in the official’s litany, it was more to do with a feeling of personal disaffection. There’s no need going into any details but it showed the kind of distraction, or perhaps destruction within the NDC as an incumbent political party towards the 2016 elections.

In terms of constitutional and electoral responsibilities, JM was performing well. The country was stable in all areas and thriving, hiccups here and there but by and large, it was a safe pair of hands in charge. After losing almost a year in the pink sheets petition, JM was left with three years to do what was expected in eight.

By election time in 2016, there was no sector of the polity/ economy that had not been touched positively by this pair of safe hands and yet, he was shown the exit. A mixture of the internally generated disaffection, a massive negative media onslaught and the cynical exploitation of the words “corruption”, “incompetence”, sweetened by “free SHS” and the darkness of “Dumsor” (though resolved by election time) became too powerful to counter. A media person enjoying some celebrity status, commenting on JM’s record in infrastructure development, scoffed at it with words that suggested that anybody could take loans to do those kinds of things! It was a hostile media towards a man legendary for his media friendliness and tolerance and respect for the freedom of expression.

From 2017, when the new administration assumed office, what have been the main visible signs of Ghana’s development if not JM’s legacy projects? The state-of-the-art Terminal 3 at Kotoka International Airport (KIA), modern health facilities like the Accra Regional Hospital and the Legon Medical School Teaching Hospital, improvement in education infrastructure as in E-Block school buildings, improvement in urban road developments as in the Kwame Nkrumah/Kejetia interchanges in Accra and Kumasi respectively, roads, water and much, much more. Food was in abundant supply and the freedoms of speech and association enjoyed unhindered and unfettered expression and Ghana’s image internationally continued rising.

During the primaries to select the NDC presidential candidate in early 2019 and outreach visits to the six new regions in the middle of the year, I went along with him and from one location to the other, I kept noticing the recurring theme of searching with a lantern in broad daylight for him… A search, which many other Ghanaians, in their own ways are engaged in privately because the allegations of corruption and incompetence which were levelled ad nauseam against Mahama are clearly more appropriate to the people who took over from his administration.

From the very embarrassing plagiarism of day one on January 7, 2017, which turned Ghana into an international laughing stock, to the present, it’s been one allegation of incompetence or corruption laden act after the other. Three major Western diplomats have had to sound the alarm of Ghana being swamped in a quagmire of corruption by the current post-Mahama administration. It would seem like even the diplomats, some of whom promoted a regime change agenda in 2016, are themselves now using lanterns in day light, not only to search for JM but to add to the sun’s light in exposing the corruption and incompetence of Mahama’s successor administration.

The claim that Dumsor was solved only after Mahama left office is disingenuously dishonest. The power generating capacity of Ghana was stabilized by Mahama before leaving office. Dumsor was so effectively put off by the massive investment in electricity generation that Ghana now has reserve capacity, which ironically, his critics are accusing him of creating excess capacity in the sector! This excess capacity is not being managed well as power outages continue to recur years after Mahama’s departure.

Against an electric power background, one of the biggest corruption scandals in post-independence Ghana, involving Power Distribution Services (PDS), hit the country. This multi-billion dollar alleged scam involving one of Ghana’s most strategic assets, the Electric Company of Ghana (ECG), if it had taken place in the bad old days of African politics, could have led to all sorts of social and security complications. The revelations from intrepid investigative journalists is peeling layer upon layer of allegations that go as far as the top of the country’s administration.

Fee-free senior high school education (Free SHS), which Mahama had not said he was against and had in fact, started introducing progressively as recommended by the constitution, was rushed through without adequate preparation, especially in the areas of logistical support including school buildings, teaching resources, books, nutrition and other crucial inputs. This is now threatening the very foundation of education in Ghana and validating Mahama’s position on affordability and quality as espoused by both the UN and AU. Mahama had already in 2015 started implementing free SHS and investing in the necessary infrastructure only for them to be halted when he left office. In chats I have had with him regarding education, he has always emphasised that it was a constitutional injunction and not the favour of any individual or political party and he saw quality as being crucial in the overall educational structure.

Looked at from the allegations of corruption or incompetence, the fallout from Dumsor or the implementation of Free SHS, no fair-minded person can come to the conclusion that Ghana did not achieve major strides with Mahama in charge nor in comparison can it be said that Nana Addo-Dankwa Akufo-Addo has shown any sparks brighter than John Mahama’s – it is rather the other way round and that is why the lanterns are out in broad daylight searching for Mahama.…