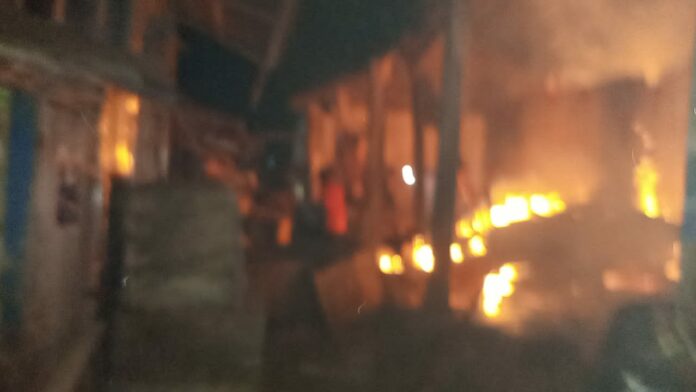 A market fire which swept through shops and stalls at the Mankessim in the Central Region has displaced over 200 traders, according media reports.

The fire which started before 11:30 p.m. comes days after a similar outbreak destroyed properties at a cold store near the Mankessim roundabout on April 18, 2021.

Fire brigade and the police were called in to douse the inferno which destroyed properties worth millions of cedis.

Though the cause of the fire is yet to be established, some people have attributed the incident to an electrical fault.

Samuel Kofi Baiden, an Assemblyman for Nkusukum Electoral Area said the incident could have been prevented if authorities provided fire extinguishers at the market.

“This is the first time I have witnessed this fire outbreak here. It has never happened before. The Mfantseman Assembly should have been proactive. We should have provided the security officers with fire extinguishers”, the Assemblyman said.

The country has been recording series of fire outbreaks in recent times with some resulting in the death of victims.

Four people were killed at Manso-Aponapon in the Ashanti Region after fire struck their home earlier this month.

Investigations are ongoing to establish the cause of the fire.

Bawumia calls for more efficient approach to use of public resources

StanChart named digital bank of the Year at 9th GITTA