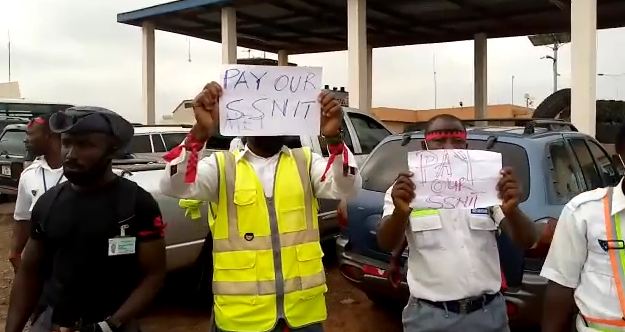 The security guards laid down their tools to demand payment of salary arrears and social security contributions which has delayed for several months.

They also lament poor working conditions as they are forced to use one uniform to work for years since assuming the post.

Clad in red gears and bands the aggrieved personnel had abandoned post and were seen loitering about at the airport when dailymailgh.com visited.

Some wielded placards with the inscriptions; “Pay Our SSNIT Now”, to press home their demands, as their action also prevented contractors working on the second phase of the airport from accessing the project site.

“We control the arrival gate, the conveyor belt and the car park. We’ve worked for four months without pay; last Monday we did a demonstration and they talked to us that by Wednesday they will pay our salaries. As we speak they have paid only one month. For four years now we’ve been working with one uniform, no rain coat when it rains we get wet. When we are at the car park and it’s raining we find somewhere to hide but when a vehicle leaves without paying toll we use our pocket money to pay else you’ll be in trouble”, one of the protesters lamented as he held a placard.

“We are giving them [management] 24 hours else we are not working today. As you can see the passengers are stranded and those at the car park are also stranded”, another said as two aircrafts stand at the airstrip awaiting further directives from airport officials.

The two-hour strike was called off after management intervened. After a marathon meeting it was agreed that management would resolve the workers’ grievances in one week.

“Initially they pleaded with us to pay our arrears in two months but we declined. They went down to one month but that was also shot down. We later resolved that they pay us in one week”, said Kwabena Abu, one of the aggrieved workers in a media interview.

“They are also to resolve issues of SSNIT and other working conditions within that time or else we will advise ourselves”, he further stated.

Management did not respond to calls for comments on the matter.