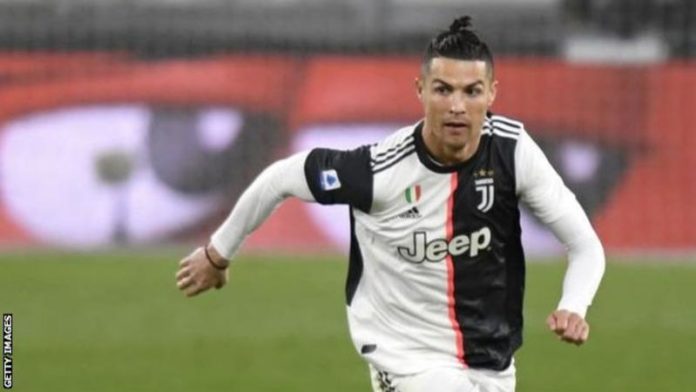 Serie A sides can return to individual training on 4 May and team training on 18 May after the Italian prime minister announced the first steps in lifting the country’s coronavirus lockdown.

There are hopes Serie A fixtures could resume between 27 May and 2 June – with the season finishing in early August.

There has been no formal announcement on when league matches may resume.

Italy has reported 26,644 coronavirus-related deaths – the highest amount in a European country.

The 260 it reported on Sunday is the lowest daily amount since 14 March.

When might Europe’s top leagues return from coronavirus suspension?
Prime Minister Giuseppe Conte said in a televised address that players would be able “to undertake training individually from 4 May, in groups from 18 May, and then we’ll evaluate if there are the conditions to allow the season to be completed”.

He added: “We need to complete all the discussions to ensure that if we do reach that stage, we’ll do so in the utmost safety and security. We are passionate about sport and don’t want our athletes to get sick.

“I’m passionate for football. Like many Italians, I initially found it strange that the championship could be interrupted or suspended but I think that even the most ardent fan understands that there wasn’t an alternative.”

Conte added that when “phase two” of the lockdown plan begins on 4 May with the easing of restrictions, social distancing of at least one metre must be maintained and this extends to two metres when exercising.

The Italian Football Federation (FIGC) hopes to begin testing players for the virus at the start of May to allow for a safe return to training and has already drawn up a medical protocol.

For the start of training, each club will form a group of players, technical staff, doctors and physiotherapists who will be tested and then isolated in a summer-style training camp.

There are also plans to donate five Covid test kits for each kit used by clubs to avoid the criticism that football is taking much-needed resources from other areas.

“There is a huge logistical and medical/scientific question about testing and protocols but also a social one,” said secretary general Jonas Baer-Hoffmann.

“We need guidance and protocols on how to return in a healthy and safe manner. Football is a contact sport and we feel very high protection standards are required.

“Are we sending the right message to society, and are we encouraging a healthy return to normal life, or are we sending a bad signal that football has different rules to the rest of the world?”

Serie A was suspended on 9 March and a number of players have tested positive for the virus. The league has insisted it is committed to finishing the season.

The FIGC said on Thursday it would push back the formal end of the season from 30 June to 2 August to allow time for remaining games to be completed.

There are 12 full rounds and four outstanding fixtures still to play, with Juventus top, a point ahead of Lazio.

Some have spoken out against a resumption, including Brescia president Massimo Cellino, whose side are bottom of the table. He has said he is ready to forfeit the club’s remaining games if the season resumes.

In the UK, the government is planning to set up the first of a series of regular meetings involving senior medical directors of the major sports in a bid to return to action as soon as possible.