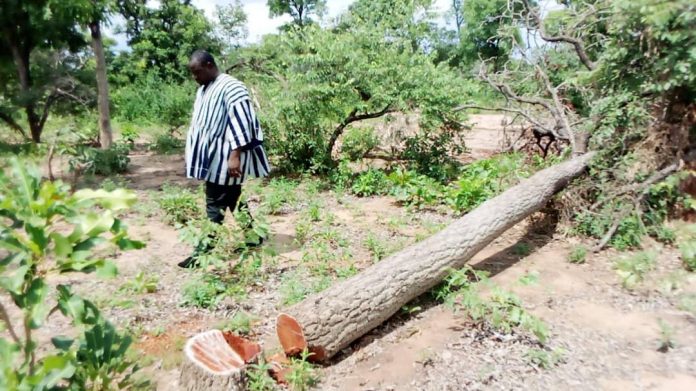 In Tinga, one of the communities in the Bole District of Ghana’s Savannah Region, Ahmdiyya Mohammed, like several other women, has been busy collecting money-spinning shea nuts all day.

The 44-year-old mother of three has been gathering the nuts for the last 10 years.

She extracts oil, which she uses to get high quality products such as cooking oil and body lotion. In northern Ghana, the shea tree is an indigenous and restricted asset. The tree produces shea nuts (seeds) from which shea butter is extracted.

Also known as vitellaria paradox, the shea tree has a useful fruit bearing life span of more than 100 years. The perennial crop grows naturally in the dry savannah belt of West Africa, from Senegal in the west to Sudan in the east, and on to the foothills of the Ethiopian highlands.

In Ghana, shea tree is mainly found across the five regions—including and in the Northern part of the Volta Region.

It’s a traditionally protected indigenous tree in these countries. The trees are not traditionally planted in a domesticated manner but rather selectively managed through agroforestry systems. In terms of importance, its oil is second to palm oil.
Currently, both the shea nut and shea butter are international commodities, and constitute a primary source of monetary income for rural people.

“We get some money to take care of the family, though not enough but we still have to survive”, Ahmdiyya told DailymailGH.com.

Aside from the health benefits, harvested sheanuts have its own economic benefits.

Shea butter is used as a moisturiser as it is rich in vitamin A, E and F, which soothes balances and hydrates the skin. It speeds up healing of wounds, promotes growth of healthy tissues in ulcerous wounds and it is used to treat baby circumcision wounds.

Shea butter is also used for frying and making of stew. The residue left after oil extraction is used to decorate traditional mud houses and also to harden the walls and make them stronger.

Even though the shea tree has several commercial value it has been under attack by charcoal burners in recent times.

Savannah Regional Minister had set up an investigative committee to probe the increasing rate of destruction of both the shea and rosewood.

Ghana’s Vice President, Dr. Mahamud Bawumia at a Northern Development Summit announced plans by government to establish a Tree Crop Development Authority that will supervise the production of cash crops.

He believed it would make it more attractive for people to be able to produce and generate income.

Some of the crops to be considered included shea, cashew, dawadawa and among many others.

However, the rate at which these commercial trees are been destroyed, it is threatening the existence of vegetation in the north.

What is even more disturbing is the fact that according to Ghana’s Environmental Protection Agency (EPA), about 80% of every 100 basketfuls of charcoal produced are from Shea trees, the other 20% come from ‘dawadawa’ and neem trees.

In a shared video by the Jaksally Development Organisation, residents of Tinga who accosted a chainsaw operator recently, accused some commercial charcoal sellers of paying huge sums of money to some indigenes to destroy the trees.

The chainsaw operator admitted he was hired along with other to cut some of these trees. The community members have seized the logs.

Programme Coordinator of Jaksally Development Organization, which supports women in the shared business in the Savanah region, Seidu Jeremiah, said several women have already started bearing the brunt and are complaining of the dwindling pick which is affecting their incomes and livelihood.

He said this is happening because of the failure of traditional authorities in Gonjaland to support the fight against shea tree and rosewood destruction.

Mr Jeremiah said women especially widows that have been excluded from society and are largely dependent on shea for survival.

He urged the traditional authorities to be concern about the way the environment is been endangered and how the livelihood vulnerable people are been destroyed.

Programme Coordinator also appealed to the various DCEs, Regional Coordinating Council and Savannah Regional Minister to step in because the situation if unchecked, has grave consequences for the shea nut industry and will contribute to environmental degradation leading to hunger and poverty in the Northern Ghana.

Ghana Army to get new headquarters