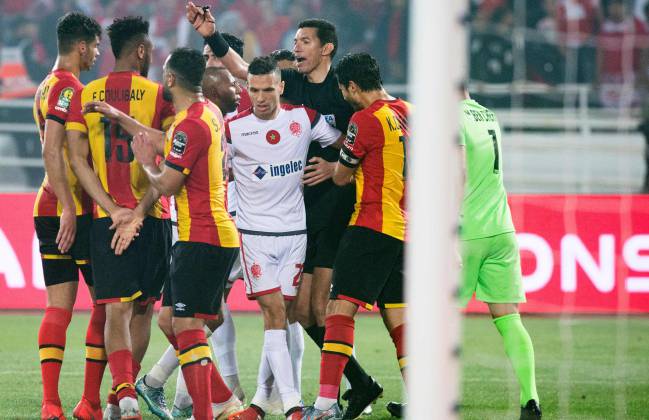 Africa has made huge strides in football, with European standards in sight.

The recent rescheduling of the Confederation of African Football’s inter-club football calendar?

The competitions’ restructuring and expansion to involve more teams than ever before at its business end?

You could probably think of a dozen other ways — big and small — in which Africa’s marquee events have increasingly mirrored Europe’s over time, but there is even more proof that, despite CAF’s best efforts, the continent remains far behind.

If you watched the two legs of the 2019 CAF Champions League final, between Morocco’s Wydad Casablanca and Esperance of Tunisia (the competition’s last two winners), you would likely concur.

Both games — and two-legged finals are still in vogue, by the way, just ask the Asians and the South Americans — served instances of how-not-to-stage-a-final, mired in controversy surrounding the video screen (fed by a bank of monitors elsewhere in the stadium) that enjoys a pitch-side seat in football these days.

The Video Assistant Referee (VAR) is still far from perfect, following its 2016 introduction to the sport, but hardly has it generated such controversy as has been witnessed over the last seven days. Egyptian referee Gehad Grisha made supposedly accurate use of it during last week’s opening clash in Rabat — denying the home team a penalty and a goal — but still copped a six-month suspension for it within days.

The reverse — contested last night, on the eve of this year’s UEFA Champions League final — had an even bitter taste, with another top African official, Bakary Gassama, in the eye of the storm. This time, WAC scored again (an equalizer, just as on the previous occasion), but the referee did not consult VAR — reportedly because it was not working. What followed was worse than a WAC official trying to join Grisha in viewing footage during the first leg; this was utter pandemonium.

A stoppage that lasted longer than the game itself had ensued, during which officials and players of WAC vented on Gassama, fans of Esperance pelted the visitors’ bench with objects, and CAF boss Ahmad joined the drama on the pitch in an attempt to figure a way out of the unfolding embarrassment. But not even the Malagasy’s august presence could resolve the deadlock; it ultimately ended with WAC’s forfeiture of the fixture and Esperance’s second successive coronation — a fourth overall.

Mkachka‘s celebrations provided a glorious climax to proceedings, but let no one be fooled: there was very little glory in what transpired — certainly not for Africa’s image.

See, these are scenes you will not have at high-level European football, regardless of the provocation, and that much will be evident in today’s Champions League decider in Madrid. VAR may not — or may — turn up in its best form, but the finalists’ behavior most assuredly will.

And so will Europe — forever Africa’s big brother — on the very first try.

‘HAND OF SUAREZ’: How I Found Closure, a Decade Later