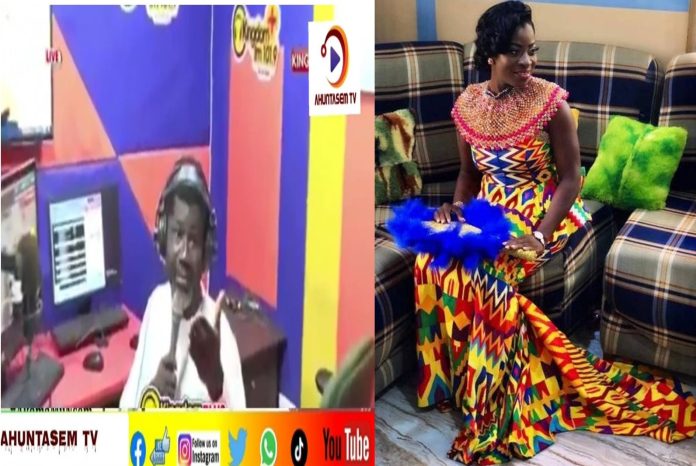 A familiar broadcaster, Prophet Nana Yaw Sarfo, went down on his knees inside a live radio studio as he repeatedly begged the Chief Executive Officer (CEO) of the S.O Group of Companies, Dr. Sophia Asi Ocansey, to forgive some individuals and media houses she sued recently for defamation.

The Defendants include Prophet Nana Yaw Sarfo’s ex-wife, Janet Adjoa Sarfo, who is said to have made some defamatory claims through a number of media outlets against the CEO of Dove Television Ghana.

The Plaintiff, whose lawyers filed the civil suit at a High Court in Accra in January 2022, is seeking “damages for Libel in the sum of Thirty Million Ghana Cedis (Gh¢30,000,000.00)” among other reliefs jointly and separately against the Defendants.

“I know [that] it will be very difficult for them to defend. I know doctor (Sophia Asi Ocansey) to be an innocent person. Let go. You have a report, an account, to render. And that report, one day it will appear [that] you could not forgive. We will be accounting for whatever we are doing. I’m still pleading [with her]. Whatever you will do, you will win the case. But I’m pleading, let go. Let go. Forgive them. Forgive them,” he said in a live broadcast on Kingdom FM.

The Statement of Claim contained in the Writ of Summons says Janet Adjoa Sarfo (the 1st Defendant) and the other defendants have damaged the reputation the Plaintiff took many years to build. Dr. Ocansey owns the S.O. Herbal Centre among other business organisations in Accra.

The 1st Defendant, per the contents of the writ, is said to have wrongly accused the Plaintiff of taking away her husband from her. Janet Adjoa Sarfo further relayed the “false information” to the other Defendants who published and broadcast it extensively for public consumption. The other defendants are said to have published and broadcast the “false information” without hearing the Plaintiff’s side of the story.

The 1st Defendant reportedly also made a defamatory remark that she (the 1st Defendant) once had an eye problem and that the condition became worse after she applied a medicine offered by the Plaintiff. The 6th and 7th Defendants are said to have published the same defamatory statement

The Other Reliefs Plaintiff is Seeking in Court

The Plaintiff’s contribution to public health is said to have won her many national and international awards. The “false and malicious allegations” levelled against her by the 1st Defendant and disseminated widely by the other Defendants are said to have caused the Plaintiff untold distress and seriously injured her hard-earned reputation.

“In consequence, the Plaintiff’s reputation has been seriously damaged and she has suffered considerable distress and embarrassment as a result of the defamatory publications complained of. Plaintiff maintains further that in consequence of the publications made by the Defendants, her reputation as one of the revered and renowned herbal medicine practitioners in Ghana has been seriously injured and that the said publications have caused the Plaintiff, its management as well as customers untold embarrassment.

“Plaintiff says the defamatory publications made by the 1st, 6th and 7th Defendants and referenced above have dealt a major reputational blow to the Plaintiff and her business operating in a market that thrives on high reputation, and to the Plaintiff as an accomplished traditional herbal practitioner who has grown a successful business over the last decade, and has further caused considerable distress and embarrassment to the Plaintiff,” the writ adds.

Also on the list of the reliefs being sought are: “an order of perpetual injunction restraining the Defendants, whether by themselves, their agents, servants, workmen, privies or anyone claiming through them, howsoever described from further writing, printing, publishing and/or causing to be written, printed and published the said words or similar statements defamatory of the Plaintiff and an order directed at the Defendants to retract the said defamatory statements in the manner and with the prominence with which the defamatory words were published.”

She also seeking “An order directed at the Defendants to render an unqualified apology to the Plaintiff in writing and cause same to be published on the Defendants’ respective online pages and portals; an order directed at the Defendants to publish a retraction and an unqualified apology in the Daily Graphic newspaper in three (3) consecutive editions; cost including Solicitor’s fees and any other relief (s) that the Honourable Court may deem fit”.