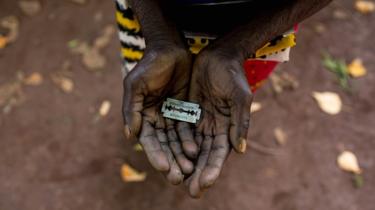 Some 87% of Sudanese women aged between 14 and 49 have undergone some form of FGM, according to the UN.

In Sudan it is common for women to get the inner and outer labia, and usually the clitoris, removed.

The latest updates from across Africa
Sudanese brides under pressure to have FGM – again
‘This is what it’s like to pee after female genital mutilation’
Girls get cut because of a widespread cultural belief that it is essential for girls’ reputations and future marriage prospects.

Why has the ban happened now?
There has been a global trend towards banning the practice.

However, according to a Unicef report carried out in 29 countries in Africa and the Middle East, the practice is still being widely carried out, despite the fact that at least 24 of these countries have legislation or some form of decrees against FGM.

FGM was already illegal in some Sudanese states but these bans were widely ignored.

BBC Sudan analyst Mohaned Hashim notes that there have been previous attempts to ban FGM across the whole country but parliament under long-time leader Omar al-Bashir rejected the recommendations.

Women were at the forefront of the movement that toppled Mr Bashir in April 2019.

Campaigners accused the former government of discriminating against women in various ways – including preventing women from wearing trousers.

In November Sudan repealed a restrictive public order law that controlled how women acted and dressed in public.

The FGM amendment to the criminal law was approved on 22 April, Reuters news agency reports.

Under the amendment, anyone who performs FGM either inside a medical establishment or elsewhere faces three years’ imprisonment and a fine.

How big a deal is this for Sudanese women?
By Insaf Abbas, BBC News

This feels like a momentous day for Sudanese women, although many are treating it with caution for fear that FGM could be driven underground.

But it’s hard for me to say how my close friends and family in Khartoum are feeling. Although I know how widespread the practice is in Sudan, it’s also very taboo. I’ve never spoken to female relatives about FGM, and I don’t even know which of them have gone through it.

Maybe that will change with this news. I’m hoping that if anything, it shakes the taboo and gets more women and girls in Sudan talking about FGM.

Media captionIt’s estimated one in 20 girls and women in the world have undergone some form of FGM
Type one: Clitoridectomy – partial or total removal of the clitoris
Type two: Excision – removal of the clitoris and inner labia (lips), with or without the outer labia
Type three: Infibulation – cutting, removal of part or all of external genitalia and stitching or narrowing of the vaginal opening
Type four: Any other type of intentional damage to the female genitalia (burning, scraping, piercing)

Ghana Immigration rescues over 50 girls being trafficked to Arab States

Nigerian senator gets 12 years in jail for stealing $19.6m