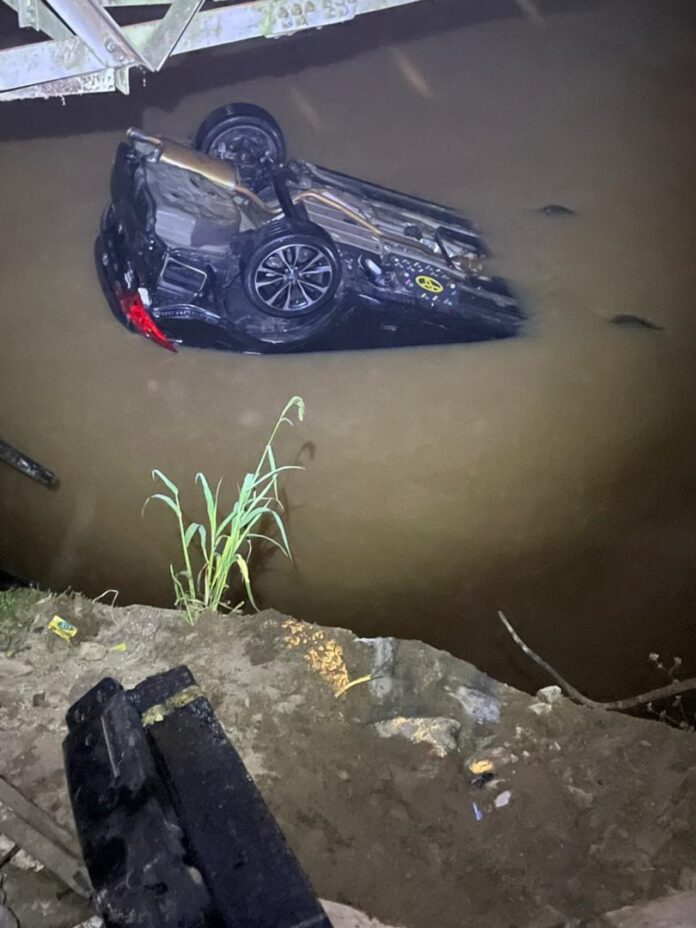 One person has died after a speeding unregistered Toyota Corolla saloon vehicle hit and pushed two lovers into the Akora River at Agona Swedru in the Central Region.

A second person suspected to be dead is a female who was standing with her lover and were knocked and pushed into the river.

Her body was yet to be found as of midday Saturday, reports graphic.com.gh.

The person confirmed dead is one of the occupants of the Toyota Corolla vehicle which was involved in the accident. He died at the hospital.

The vehicle itself, had three occupants plunged into the river.

The boyfriend of the lady is responding to treatment at the Agona Swedru Government Hospital, after he was rescued from the river together with the three occupants of the vehicle from the river.

The driver of the Toyota Corolla, together with two other occupants, yet to be identified, were on board the car which was moving from the Texaco direction towards Chapel Square, reports Graphic Online’s Gilbert Mawuli Agbey.

The incident happened around 2am.

The lovers were standing in front of a shop on the left side of the road towards the main Swedru bridge across the river.

According to information gathered by Graphic Online, the driver of the Toyota Camry who was driving at top speed after initiating a sharp curve lost control and veered off his lane to the left side, hit the two lovers and a shop before entering the river around 2am.

Good Samaritans who were around rushed to the scene and entered the river in an attempt to rescue the five but they found just the four.

Unfortunately, the body of the young lady whose identity is not yet known as of midday Saturday had still not been found.

The three occupants of the Toyota Corolla together with the boyfriend of the lady were rushed to the Swedru Government for medical attention but one of the male occupants of the vehicle died while on admission.

According to some residents of Assissim and Ankyease, both suburbs of Agona Swedru, the driver was earlier spotted driving carelessly within both areas.

They were however not surprised to later hear that the vehicle had been involved in an accident.

An official of the Agona West Municipal Office of the National Disaster Management Organisation (NADMO), Mr Moses Akomanyi who was at the scene said the car was towed around 6am and has since been transported to the Swedru Divisional Unit of the Motor Traffic and Transport Department (MTTD) of the Ghana Police Service.

‘I apologise profusely’ – Oxford president resigns over abuse of blind...