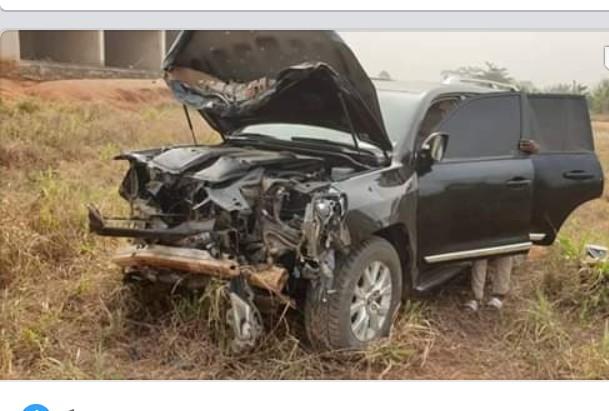 Two Ghanaian opposition lawmakers are responding to treatment after their vehicles got involved in an accident Saturday morning.

Minority Chief Whip and Asawase MP Muntaka Mubarak and his deputy, Hon Ahmed Banda —who doubles as MP for Banda —were were travelling to Sunyani from Ghana’s capital, Accra for a funeral when their SUV got involved in an accident at about 9 am.

The incident reportedly happened at Kubease, near Konongo in the Ashanti Region, reports say.

Local website myjoyonline.com reported however that an immigration vehicle made U-turn on the Konongo highway, and in the MPs driver’s bid to avoid running into the vehicle, they veered off the road and entered the bush.

The MPs and their entourage, were rushed to the Komfo Anokye Teaching Hospital in Kumasi for treatment, local media reported.

“It is with a grateful heart that I wish to inform all well-wishers that the two honourable members of Parliament are fine and responding to treatment”, a Deputy Communication Director of the opposition National Democratic Congress (NDC), Eric Agyei wrote on Facebook.

The two legislators have since been discharged.

Meanwhile, another accident recorded on Saturday evening also claimed the lives of at least nine persons at Kete Krachi in the Oti Region.

Fifty-one others are also battling for their lives in separate health facilities including the Kete Krachi District Hospital, police told reporters.

They were travelling from Osramani to Gyasayo, media reports say.

A District Police Commander at Kete Krachi, DSP Kwabena Nkrumah told Accra-based Citi FM that the victims were returning from a funeral when the incident occurred.

“As we speak, six of them have also died bringing the death toll to nine. The others have been admitted and are receiving treatment”, the Police Chief said pointing to mechanical fault as cause of the accident.