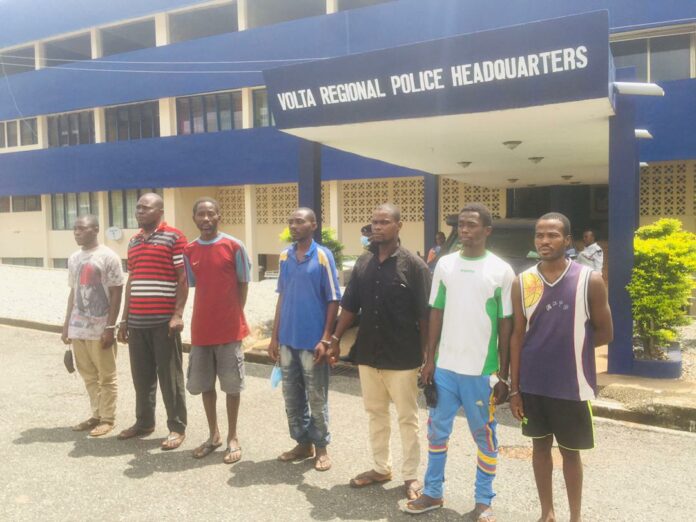 Seven men are in the grip of the Police in the Volta Region over the death of a 12- year-old boy, Cornelius Negble, in what is believed to be a ritual murder.

The suspects, including a fetish priest, were picked up after the dastardly act which was purposed to help the fetish priest to build a new deity.

The Volta Regional Police Commander, Deputy Commissioner of Police (DCOP) Edward Oduro Kwarteng, said one of the suspects, Senanu Ashitor, the main architect and a native of Atidzive, near Tadzewu, allegedly dealt in human parts and had promised to get the fetish priest human parts to perform sacrifices in building a new deity to be named Agbavor.

The fetish priest then instructed his assistants, Anani Koko and Morris, now at large, to meet Ashitor at Nornyikpo on May, 21, to carry out the act.

He said prior to the execution of the act, an eyewitness eavesdropped a telephone conversation between Ashitor and the two assigns, but could not figure out who the target was until the disappearance of Cornelius.

Ashitor at about 18:30 hours called the unsuspecting 12 -year- old boy to accompany him to a nearby forest, with the two other suspects trailing at a distance.

DCOP Oduro Kwarteng said, the suspect, once out of sight and in the forest, grabbed his victim by the neck, forcibly pushed him to the ground and called his accomplices. The trio then killed Cornelius Negble, put his body in a sack and conveyed same on a motorbike to a shrine at Nudowukorpe for the ritual.

The following day, the grandmother of the deceased, Mary Amewonu, lodged a report at the Kpetoe Police Station after Cornelius failed to return home.

DCOP Oduro Kwarteng said at 18:30hrs the same day, an Assemblyman for the Atsrulume Electoral Area assisted by five others arrested Senanu Ashitor Atsikpo on suspicion and was subsequently detained.

Information gathered by the police indicated that Ashitor acted in concert with the two other accomplices to abduct and kill little Cornelius for ritual purposes. Police extended investigation to the said shrine but met none of the collaborators.

Police on May 31, this year, returned to the shrine at Nudowukorpe to effect the arrest of the abductors and also rescue the victim but unfortunately, the boy had already been killed and the head severed and buried in one of the rooms while the body was kept in a sack which was heavily infested with maggots.

It emerged that the intestines, kidney, heart and private parts of the deceased had been removed after an inspection by the police and an environmental health team.

The remains of the boy have since been moved to the Police Hospital in Accra for preservation and autopsy.

DCOP Oduro Kwarteng said when the fetish priest, Hunor Kofi, and his assigns learnt of police pursuit, they escaped to Aflao and crossed the border into neighbouring Togo.

Hunor Kofi and his brother, Anani Koko, were, however, arrested by a joint Ghana-Togo Interpol on June 19, at Voga in Togo and extradited to Ghana to assist in investigation and subsequent prosecution.