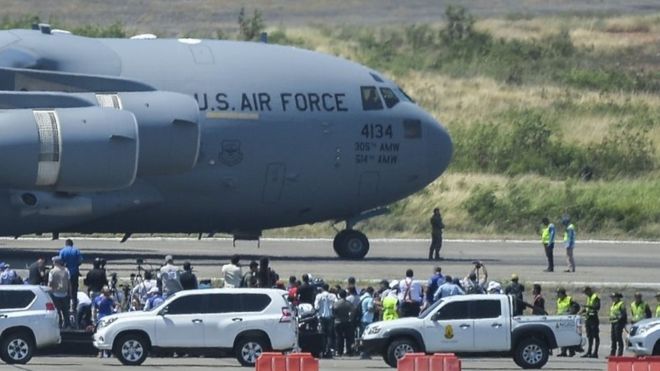 US military planes have been delivering humanitarian aid for Venezuela in the Colombian border town of Cucuta.

The aid is being stockpiled at the request of the Venezuelan opposition leader, Juan Guaidó, who declared himself interim president last month.

President Nicolás Maduro has alleged that the aid is part of a US plot to disguise an invasion into Venezuela.

Mr Guaidó said some 600,000 Venezuelan volunteers would carry the aid across the border on 23 February.

“We will mobilise within and outside our borders,” he said in a tweet on Saturday, adding: “Our struggle continues to yield results!”

It remains unclear if the aid will be allowed to enter Venezuela.

One road bridge between Venezuela and Colombia remains blocked on the Venezuelan side by shipping containers.

Speaking at a news conference in Cucuta, USAID administrator Mark Green said the aid had been requested by Mr Guaidó because Venezuela was in the grip of a growing humanitarian crisis.

“Children are going hungry, and nearly every hospital in Venezuela is experiencing serious medicine shortages.”

He said the crisis had reached regional proportions, with three million Venezuelans migrating to neighbouring countries in search of food and medicine.

“Today we are standing on the frontlines of one of the largest displacements of people in the history of Latin America.”

A representative for Mr Guaidó said more collection points for aid were being opened up in Brazil and the Caribbean.

He said meetings would take place with the Brazilian government this week to organise details of storage facilities in the Brazilian state of Roraima on the border with Venezuela.

He added that aid was being stockpiled in Miami to be flown to the Dutch territory of Curaçao early next week.

President Maduro has called the operation a US-orchestrated show and denies there is any crisis.

On Friday he ordered the military to remain on high alert against what he described as US “war plans”.

We will abolish ex gratia if voted into power – CPP