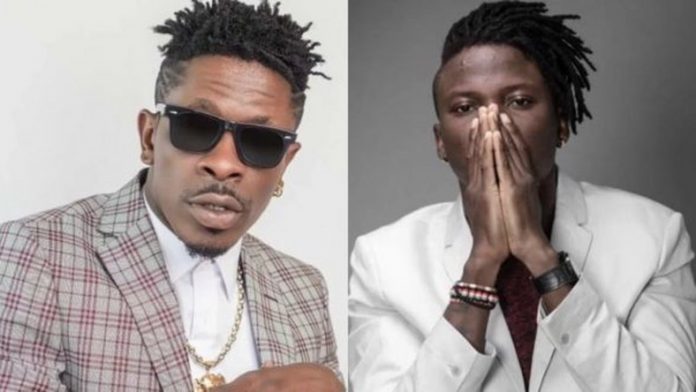 Dancehall artiste Shatta Wale and his rival Stonebwoy have been granted bail after spending a night in custody following clashes on the stage of the Vodafone Ghana Music Awards Sunday.

The police have cautioned Shatta Wale for offensive conduct while Stonebwoy has been cautioned for displaying an offensive weapon.

One other person is also in custody for spraying pepper spray during the fracas at the auditorium.

“Preliminary investigation, however, reveals that the disturbance occurred after Livingston Etse Satekla [Stonebwoy] was declared winner of the Reggae Dancehall Artiste of the year and had mounted the stage to receive his award. Charles Nii Armah Mensah [Shatta Wale] also moved on state uninvited, provoking a scuffle between them and their patrons.

“The two, together with one other suspect, Nii Amoo, who was seen discharging pepper spray in the auditorium… have been granted bail to be arraigned before court in due time,” DSP Effia Tenge, head of public affairs of the Greater Accra regional police command said in a statement.

The two popular Ghanaian musicians, Stonebwoy and Shatta Wale have been in police detention for the incident that marred the 20th edition of the Vodafone Ghana Music Awards.

The two are at the Greater Accra Regional Police Command assisting in investigations.

MUSIC VIDEO REVIEW: Ayisi Keeps It As Simple As A ‘Prayer’