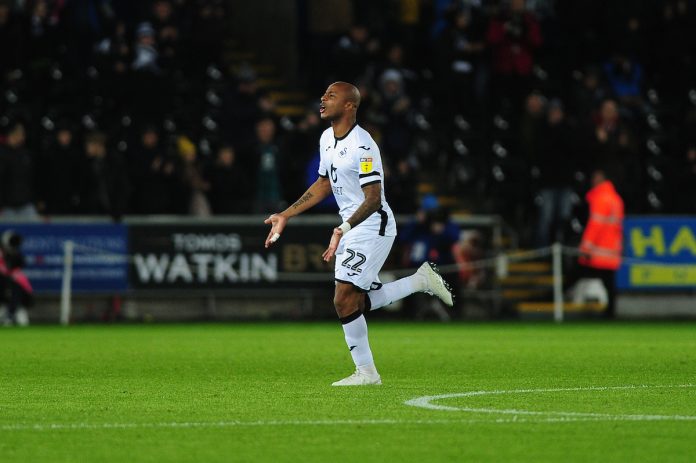 Black Stars captain Andre Ayew was on target for Swansea City in their 1-1 draw game against Blackburn Rovers.

The 29-year-old Ghanaian attacker scored the equalizer to earn his side a point against Blackburn Rovers in the English Championship on Wednesday.

Blackburn opened the scoring four minutes into the match with a goal from Daniel Graham to make it 1-0 for the away team.

The Ghanaian versatile forward Ayew levelled matters for the Swans six minutes after falling behind with a superb bullet-header following a set piece situation to make it 1-1.

The entertainment didn’t cease as both teams pushed for the second goal before the break.

The first 45 minutes ended in a draw as both teams failed to add to their tally.

After the recess, both teams could not take full control of the game and it remained a balanced one with Swansea providing some threat in the opposition area.

Thomas Carroll was sent off for a series of fouls 12 minutes after recess.

Despite the numerical advantage, the visitors could not create goalscoring chances in the match before they were also reduced to 10-men when Bradley Dack was shown the exit 67 minutes into the match.

The match ended 1-1 with Swansea remaining on 10th position despite a good start to the season.

Tributes: ‘You served our nation well’ – Wontumi, Blay others...