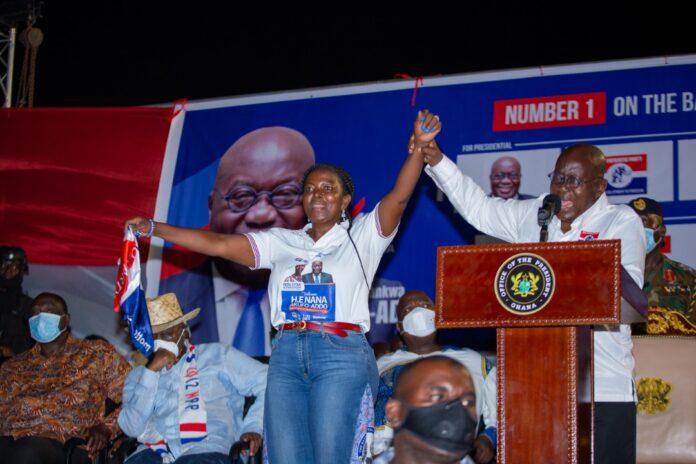 President Nana Addo Dankwa Akufo-Addo, on Wednesday, November, 25 2020, visited the Ayawaso West Wuogon in a mini rally held in his honor to address constituents as this year’s elections approaches.

The mammoth crowd was gathered at the American House bus station within the Constituency.

The president was joined by the incumbent MP, Lydia Seyram Alhassan, and other party bigwigs such as the trade minister, Alan Kyeremanteng and the Roads Minister, Amoako-Attah, Shirley Ayorkor Botchway, Foreign Minister, Prof. Adu Gyamfi, Board Chairman for NHIS, Mr. Boateng Gyenfi, Chairman for EXIM BANK, among others.

The president in His address asked the electorate the be discerning in the upcoming elections.

Heralding the various achievements of his administration, he admonished constituents to pit progressive and well though-out policies by the NPP such as free SHS, provision of ambulances and the digitization of the economy against the seemingly empty promises of the former president Mahama and the leading opposition party the National Democratic Congress.