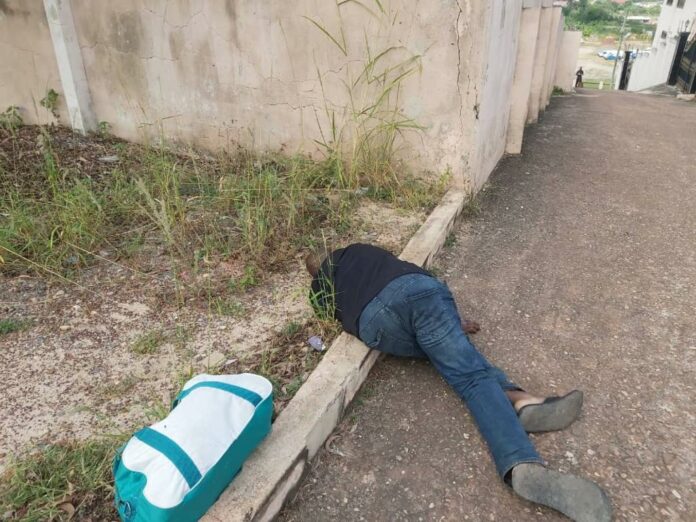 A 55-year-old man was on Thursday, August 19, found dead after he allegedly escaped from the Covid-19 Centre of the Effia-Nkwanta Regional Hospital in the Western Region.

Hospital authorities say Paulus Okine left the covid treatment centre because of his insistence that he had not contracted the disease. He had reported to the hospital’s Accident and Emergency Department where he was screened.

The Public Relations Officer of the Hospital, Mr Christian Baidoo said Paulus Okine was referred to the covid centre, however, on Thursday morning he was seen packing out of the centre located inside the Communicable Disease Hospital (CDH).

Aware of his status, security man on duty at the treatment centre questioned him about where he was going. Paulus Okine rather warned the security man not to approach or pursue him or he (Okine) would harm him.

The patient hurriedly exited before the security detail could report the incident but was found dead near the hospital’s nurses quarters later, with his green and white bag lying by his side.

It is suspected that when Okine moved from the hospital, he trekked to the main road by climbing the hilly, near three kilometer distance through the nurses quarters in an attempt to descend to the bus stop.

Mr Baidoo said the incident has since been reported to the Sekondi District Police Command and that the body has been deposited at the hospital’s morgue.

For her part, the Deputy Director of Nursing Services (DDNS) of the regional hospital, Madam Justina Amo Yartey, said it was important that people respect the directives of health professionals.

She said the current situation where people walkabout without following the covid safety protocols is not the best to help in the fight against the pandemic, adding that “Aside what we can do as health professionals to control it, we need the support of the members of the general public.”

She advised all to observe the covid protocols – hand hygiene, wearing of nose mask, social distancing and others “because the disease is real and it is with us.”

UNESCO shows 40% of poorest countries failed to support learners at...