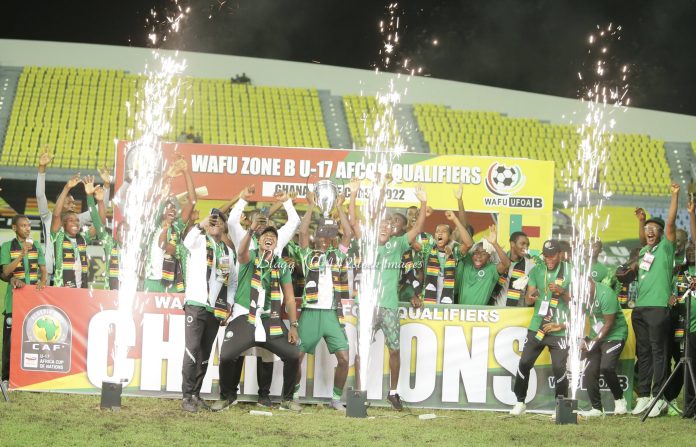 The Golden Eaglets of Nigeria who are the most successful national U17 team in the world have emerged the winners of the 2022 West African Football Union (WAFU) B under 17 tournament following their 2-1 win over the Young Stallions of Burkina Faso.

The final was played between the two west African rivals on Friday, June 24, 2022, at the Cape Coast Stadium in Ghana as Nigeria became the first team to beat the Burkinabes.

On the 22nd minute of the end-to-end match, Abubakar Abdullahi headed home in style to put the Nigerians ahead following a pinpoint cross from the left side of attack.

Abdullahi missed a golden opportunity to make it two for himself and for Nigeria, as he fluffed his lines, allowing the Stallions a respite.

After that horrible miss earlier on, Nigeria were made to pay for their missed opportunities about seven minutes later when Abdulramane Ouedraogo headed home the equaliser to make it 1-1 and deservedly so for the Stallions.

Both sides went into the break with the scoreline level and nothing separating the two teams.

Two minutes into the second-half, Nigeria restored their lead courtesy a strike by Abdullahi who completed his brace on the night after taking advantage of a poor goalkeeping by the Burkinabe goalie to make it 2-1.

The youngster should have netted a hat-trick in the encounter, but he missed a glorious opportunity to score his third goal of the game and later on was substituted due to injury.

The Young Stallions almost took advantage of Nigeria’s missed opportunities again but impressive Golden Eaglets goalkeeper Richard Odoh made so many magnificent saves and won the Man-Of-The-Match award after the game.

The game ended 2-1 to Nigeria as they won the competition and booked their place in the CAF U17 Championship later this year in Algeria.

Nigeria are the record champions of the FIFA U-17 Championship with five trophies with their last success dating back to 2015 and with Brazil lurking with four titles, Nigeria would be hoping for another truimph to stretch their lead.

US congratulates Akufo-Addo on his re-election