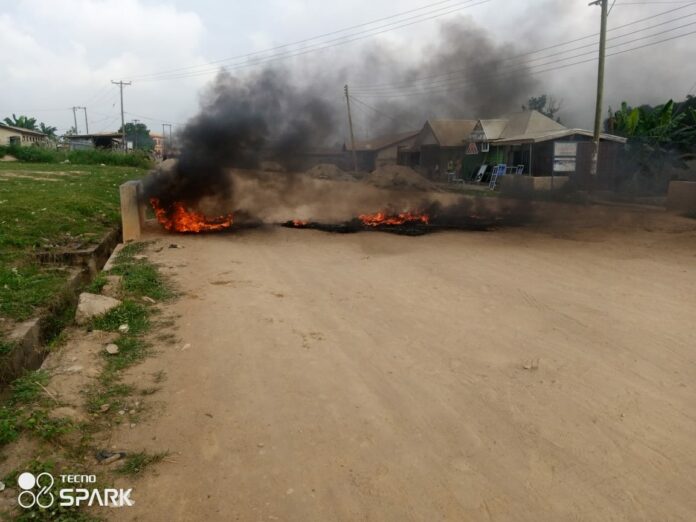 Residents have taken to the streets of Kenyase-Adwumam to protest in one of Ashanti Region’s under-developed towns.

Demonstrators gathered in the Kwabre East Municipal town to denounce MP for the area, Francisca Oteng for failing to tackle issues including potholed roads.

Since 2017, Francisca, has been representing the Constituency in parliament on the ticket of the governing New Patriotic Party (NPP) whose leader and incumbent President Akufo-Addo defeated former President John Mahama for the second time in the 2020 polls.

Her popularity has fallen as she has long been accused by residents, including her own party delegates of failing to bring development through various initiatives.

On Tuesday, August 10, the protesters, most wearing red bands, defied COVID protocols to press home their demands. They waved placards which read; “We are suffering”, “Bad roads killing us”, Mr President, Act Now!”, among others.

The over 10 km road which connects residents to Mampongten, the Municipal capital has yet received any major facelift although it was evident that contract has been awarded for the commencement of work.

“We have been suffering on this road. Our vehicles break down momentarily and this affects daily sales. The Municipal Chief Executive is not concerned about our plights. He doesn’t use this stretch and so he is unfazed with the hard times we face”, Martin said.

Another resident Yvonne Mensah said: “The bad road adds to our worsening plights in Kwabre. We have nobody to rescue us. We feel forgotten if you ask me. Are we not Ghanaians?”

The police were called in to restore calm after the protesters mounted roadblocks, setting bonfires and causing a massive gridlock on the dusty road.

The angry residents later addressed the media after the two-hour walk.

Emmanuel Ampong, convener of the concerned residents said: “We want the government to come in and construct the road for us… Anytime contractor comes prior to the elections he abandons site immediately after the elections. And this is causing havoc for us”

This protest comes following the government’s earlier declaration to fix deplorable roads in the country although many have questioned the source of funding to execute such projects.