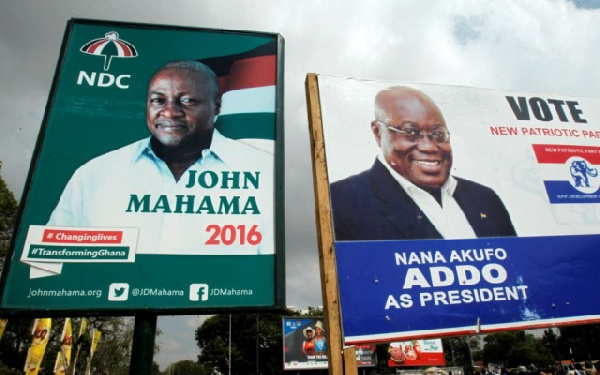 More than half of Ghanaians of voting age surveyed in the Ghana Election Poll do not think the country is ready for another political party outside the ruling New Patriotic Party (NPP) and the main opposition National Democratic Congress (NDC).

The first wave of results of the Ghana Election Poll conducted online via the renowned market research firm MSI-ACI from May 1 through to June 30 finds 51% of the respondents out of the weighted sample of 792 adults voting against a third political force. Less than a third (27%) of the respondents think another party should be considered while 22% were undecided.

The disaffection for both the NDC and NPP is concentrated in the Greater Accra Region while the Eastern, Ashanti, Central and Northern regions do not think it is time to vote a different party into power apart from the NDC and NPP.

Ghana has so far had five presidents under the Fourth Republic (1993 – present) and all five were from both the NDC and NPP. The Convention People’s Party (CPP), the Progressive People’s Party (PPP), the People’s National Convention (PNC) among others have always struggled to be the third force in Ghana’s politics.

Results for the full sample have a margin of sampling error (with finite population correction) of plus or minus 3.482%. A representative sample of the Ghanaian population was achieved by weighting (matching) the data according to age and gender demographics of the 2010 population and housing census and the Ghana Living Standards Survey (GLSS 7).

Click here to take part in the second wave of the Ghana Election Poll.

E/R: Four for court for defying ban on public gatherings to...

Rehab of Tono irrigation scheme to be completed in July 2020;...