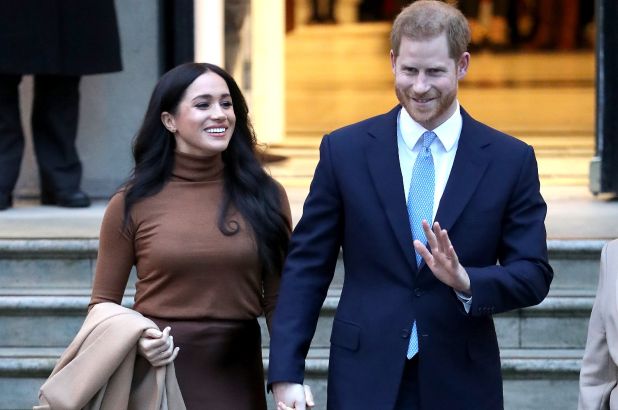 The Royal Family are said to be “hurt” at the Duke and Duchess of Sussex’s announcement they will step back as senior royals.

Prince Harry and Meghan did not consult any senior royal before making the statement, the BBC understands.

Buckingham Palace was “blindsided”, said BBC royal correspondent Jonny Dymond, as talks about their future had begun but were in very early stages.

The Palace said there were “complicated issues” to work through.

In their statement on Wednesday, Harry and Meghan said they made the decision “after many months of reflection and internal discussions”.

They plan to split their time between the UK and North America, while “continuing to honour our duty to the Queen, the Commonwealth, and our patronages”.

“This geographic balance will enable us to raise our son with an appreciation for the royal tradition into which he was born, while also providing our family with the space to focus on the next chapter,” the couple said.

Former press secretary to the Queen Dickie Arbiter said exactly how they will execute their plan “remains to be seen”.

He told Newsnight. “There’s a question of security: who provides the security?

“Is it Scotland Yard, as it does provide royalty protection. Is it the Canadians that’s going to be asked to provide it? Who is going to pay for it?”

This is clearly a major rift between Harry and Meghan on one part, and the rest of the Royal Family on the other.

There are far more questions than answers; what will their new role be? Where will they live, and who will pay for it? What relationship will they have with the rest of the Royal Family?

And there’s the institutional question. What does this mean for the Royal Family?

It comes just months after Prince Andrew stepped back from his duties after a BBC interview about his ties to sex offender Jeffrey Epstein.

Some might see this as the slimmed-down monarchy that the 21st Century needs.

But Harry and Meghan reached people that other royals didn’t. They were part of the reinvention and refreshing of the institution.

We’re now in wait-and-see mode as to whether this new model of being a royal can work – or if this is really a staging post for them to leave the Royal Family.

Signs the couple were unhappy with their royal life have been apparent for some months.

In October last year, the Duchess of Sussex began legal action against the Mail on Sunday over a claim that it unlawfully published one of her private letters. The paper stands by its story.

At the time, Prince Harry said his wife had “become one of the latest victims of a British tabloid press” after a “ruthless campaign” of “relentless propaganda”.

“Though we have continued to put on a brave face… I cannot begin to describe how painful it has been,” he said.

In an ITV documentary last year, Meghan, who was born in the US, described motherhood as a “struggle” due to intense interest from newspapers. “Not many people have asked if I’m OK,” she said.

On Wednesday the royal couple announced they would be adopting a “revised media approach” from the spring.

As part of the new strategy, published on their website, they will “engage with grassroots media organisations and young, up-and-coming journalists”.

They will also pull out of the so-called royal rota system, where journalists and media representatives are given exclusive access to cover royal engagements on the understanding they share the material they gather.

“The current system predates the dramatic transformation of news reporting in the digital age,” the couple said.

Harry is sixth in line to the throne – behind Prince Charles, Prince William and his three children.

I’m black and proud; I don’t give a damn – WHO boss replies Trump, others

Meet the Ghanaian actor who has slept with 2,500 women and...