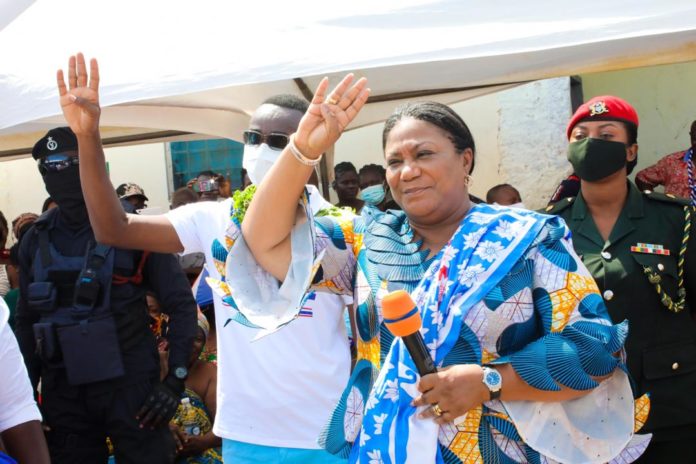 The First Lady first met with members of the La Traditional Council to extend the best wishes of H.E the President elections and assure them of H.E the President’s commitment to work hard again for all Ghanaians, when voted into office for four more years.

The First lady’s next stop was the La General Market where she interacted with traders on the impact of government policies on their lives.

She said the Akufo-Addo led NPP government is determined to empower every Ghanaian and create an equal playing field for everyone to harness their potential and make a decent living, and this is what informed the implementation of policies such as Free SHS, 1 District 1 Factory (1D1F), Planting for Food and Jobs (PFJ), and establishment of institutions such as the Coastal development Authority.

Mrs. Akufo-Addo said government is also working with the relevant institutions to strengthen the technical and vocational arm of education to make it possible for those who for various reasons dropped out of school in the past to go back to school to acquire trade skills.

The First lady also visited the 37 Military Hospital Lorry Station where she was met by jubilant traders and drivers who asked the First lady to extend their profound gratitude to H.E. President Akufo-Addo for honouring his promise to implement Free SHS in his first term of office and to assure him of their total support to secure four more to do more.

At a grand durbar held in her honour at Manjaanoo also in the La Dadekotopon Municipality, Mrs. Akufo-Addo advised the constituents to vote for a candidate and a party which has delivered on their promises despite heavy scepticism and cynicism stating, “when under President Kufuor we promised to bring NHIS, they said we couldn’t but we did; when under President Akufo-Addo we promised to bring Free SHS too, they said we couldn’t, but again the NPP has delivered”.

She assured them of President Akufo-Addo and the NPP’s ability to work to enhance their social and economic status and said the surest way for Ghanaians to witness the full transformation of Ghana as envisioned by President Akufo-Addo is to vote massively for the NPP on December 7th, to give him four more years to do more.