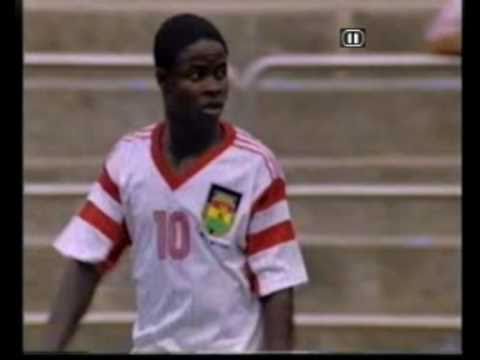 Some men are remembered for how they lived played, others for how they died, and among the few memorable for both, there is one name many Ghanaians could easily recollect, albeit hardly with a dry eye: Benjamin Shamo Quaye.

It’s been more than two decades since Quaye, nimble-footed and incredibly exciting to watch, met his demise. Ask any fan of Ghanaian football aged 30 — or thereabouts — and older, though, and you would have your ears tickled with stories of Quaye’s prowess. It’s the stuff of legends, really.

The Man
Quaye burst onto the scene some 32 years ago while still in his teens, as part of the fresh set-up that emerged from Hearts of Oak’s youth team and which would be affectionately tagged by the club’s rank and file as the ‘Musical Youth’.

Together with the likes of Sam Ablade Kumah, Ezekiel Alamu, Joe Addo, and Eben Dugbartey, Quaye formed the nucleus of a side that would repay the confidence of then Hearts capo and future Ghana Football Association boss Dr. Nyaho Nyaho-Tamakloe (who had dared taken the gamble of clearing the Phobians’ ageing and under-performing veterans, raising in their place a bunch of unproven youngsters) several times over, thrilling the fans, too, while that famous experiment lasted.

Before long, Quaye had the chance to represent his country, featuring in Ghana’s squad for the Mens’ Football tournament at the 1992 Summer Olympics. There, in Barcelona, Quaye — sporting the hallowed No.10 shirt — wowed and, along with his teammates (some of whom, like Bayern Munich great Samuel Osei Kufuor, would go on to reach even greater heights), powered the Black Meteors to secure bronze, becoming the first African team in the Games’ history to claim a place on the podium.

Quaye soon found his way beyond Ghana’s shores, joining Saudi outfit Al-Qadisiya Al Khubar. He’d return to his boyhood club, Hearts, after two seasons in the Gulf, but would once more swap the rainbow colours for greener pastures abroad. By then a full Ghana international, Quaye signed for Swedish side Umea, playing there until, well…

The Myth
The 1996/97 domestic football season in Sweden had just ended and Quaye returned to Ghana for the holidays. While spending some time on the pitch during that brief stay, Quaye suffered a freak accident that would ultimately end his 26-year-old life. As the story goes, the ball struck Quaye’s face/head, triggering a series of complications that, somehow, culminated in his death on November 30, 1997 — 22 years to this day.

While the above is a rather logical — and, perhaps, more plausible — explanation of Quaye’s death, it isn’t the only report that made the rounds at the time; the other would have you scratching your head in, er, disbelief.

Bartholomäus Grill, the Africa correspondent for German weekly newspaper Die Zeit, told it this way: “When Shamo Quaye, who was playing professionally in Sweden, came home to Ghana to collect debts from his old team [Hearts], he was bitten by a poisonous snake while at supper [in his own home]. He died on the way to hospital. The whole country had only one explanation: Juju, black magic.”

Weird, yet that seems the more widely circulated version of how Quaye died. As Grill points out, it is what the majority chose — and still choose — to believe; not very surprising, in a country where superstition enjoys great currency. With his death thus shrouded in seemingly unsolved mystery, Quaye’s stature has only been elevated post-mortem — even into mythical realms.

Wonders!
Quaye — nicknamed ‘Shamo Wonder’ for his sheer artistry, silky passes and graceful footwork in his midfield role; ‘Bebeto’ for the similarity of his style to that of a Brazilian World Cup winner of his day; or, even more popularly, ‘Shamo Leather’ for the smooth manner in which his feet caressed a football — was as naturally gifted as any in his generation of Ghanaian players, and had enough potential to have become much better with time — time he was never afforded by the cruelest of circumstances.

Stocky and with a low center of gravity, Quaye, along with Kotoko’s Joe Debrah, were involved in a battle of footballing brilliance that would put even the feisty Ronaldo-Messi feud to bed any day; when both united for the national team, it was a sight to behold. On the pitch, Quaye dazzled; off it, he amused, although unwittingly. Mocked for his supposedly low academic intellect (only the ignorant would fault his incredible soccer IQ, though), Quaye would be recalled as the fellow who reportedly dreamt of playing for ‘a big Italian club like Barcelona’, and who ‘read’ his money rather than counted it.

Even in a nation whose football fans are notoriously hard to please, sweet and talented Quaye worked his way well and fast into his countrymen’s hearts — and there he would stay forever. Little wonder, then, that in the age-old ‘Ghana 1-100 India’ tale, Quaye is often cited as the daring player who braved fatal consequences and got Ghana’s consolatory goal; clearly the hero of this rather fictitious story, as the kids narrating it would tell you!

Time will pass, players would come and go, but only the very best remain unforgotten. Of Quaye, as wonderful in death as in life, that is certainly true.

Man ‘tricked’ into buying baby lotion instead of sanitizer

Family give inherited house away for clinic in Ghana