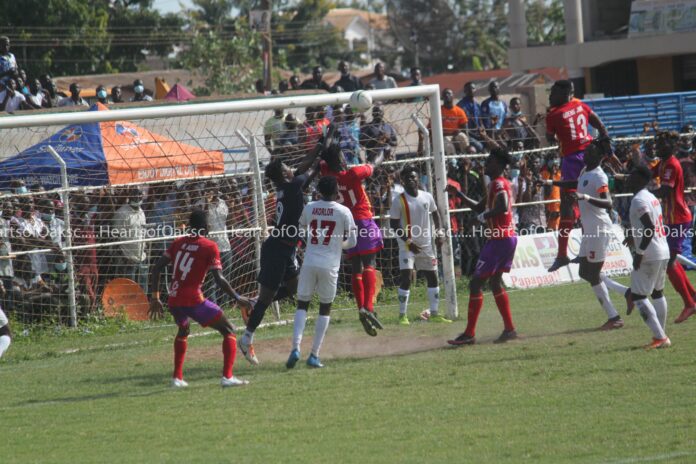 Lanky attacker Kojo Obeng Jnr netted the only goal of the match when he pounced on a loose ball inside the six-yard box after Tetteh Nortey failed to clear his lines as his weak back pass was latched on by the predator into the back of the net.

The Phobians were the better side right from the blast of the referee’s whistle in the first half and should’ve gotten themselves the opening goal of the match under ten minutes as they created numerous goal scoring chances in the first ten minutes of the match but failed to make use of the opportunities.

The hosts thought they had won themselves a spot kick when a ball hit defender Robert Addo’s hand inside the goal as the center referee waved play on.

The second half was largely dominated by the home team but they could not found the back of the net as they succumbed to a narrow defeat to the Rainbow Boys at home.

Hearts of Oak have won their last five games in the Ghana Premier League which has taken them to the apex of the table for the first since August 7 2016.

The Phobians are a point above arch rivals, Kumasi Asante Kotoko SC who will face West African Football Academy (WAFA) SC tomorrow at the Len Clay Stadium in Obuasi.

Hearts will hosts Chelsea FC from Berekum next two weeks at the Accra Sports Stadium in their next game.

Rawlings’ integrity, sublime leadership imprinted in the sand of time –...