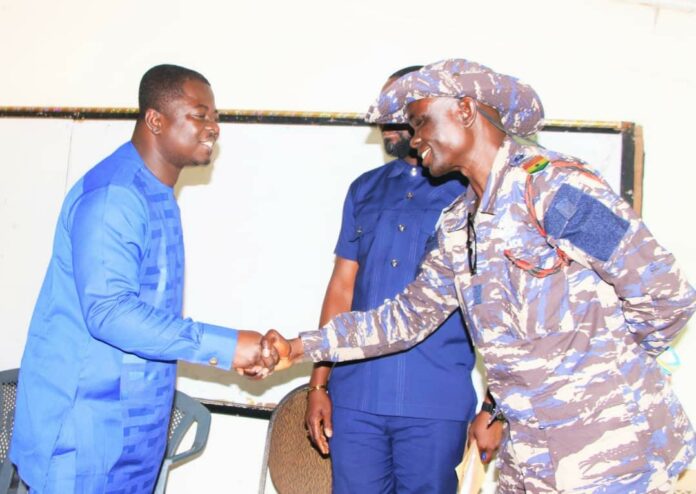 This is in pursuance of the agency’s mandate to create jobs for the unemployed youth of the country, as well as, assist the Ghana Police Service in preventive and social community policing.

The CEO of YEA, Kofi Baah Agyepong, who is championing an agenda to make the agency the base of employment among all sectors of the economy, believes that empowering young people, through the creation of stop-gap measures, promotion of skills training and entrepreneurship is a major means of reducing unemployment while ensuring economic growth.

On Wednesday (26 October), the agency began a national physical examination exercise across all the district offices of the country as part of a process to shortlist the first batch of 5000 applicants into the module.

Scores of young men and women who had trooped to the YEA district offices in all regions were seen going through assessment of their heights, visual examination, physical appearance amongst others.

Agyepong, who embarked on a tour of some examination centres together with some members of his management team, said this is an opportune time to be recruited as a beneficiary of the YEA.

He gave assurance to the beneficiaries of the consistent flow of their stipends at the end of the month, hinting of a possible increase.

What is more exciting for Agyepong and to the beneficiaries is his commitment to ensure that most of the beneficiaries with the requisite certification, skills and knowledge will be drafted into the mainstream police service during their enlistment.

“You are undergoing screening for body selection and physical examinations as part of the eligibility criteria for the recruitment exercise because, this time around we want to ensure that those of you who will perform will be absorbed into the Ghana Police Service as the official quota of the agency,” he told told the potential beneficiaries.

The screening exercise will be followed by a training programme to be rolled out in three phases for the 15,000 successful applicants.

Each phase will have a batch of 5,000 successful applicants undergo the mandatory three weeks intensive training by the Ghana Police Service at the various Police Training Colleges across the country.

Recruitment of these 15,000 Community Protection Assistants is coming on the heels of the passing out of 6,000 youth under the Community Health Workers (CHWs) module a fortnight ago.

For Agyepong, creation of sustainable programmes and jobs was top on his agenda as CEO of the YEA and especially in this period of economic hardships. He said it is his vision to reduce the burden of Ghanaians by creating a lot of jobs to solidify President Nana Addo Dankwa Akufo-Addo’s ‘One Million Jobs Agenda’.

He also hoped to collaborate more effectively with the private sector in pursuit of making YEA the pivot of jobs creation in Ghana.