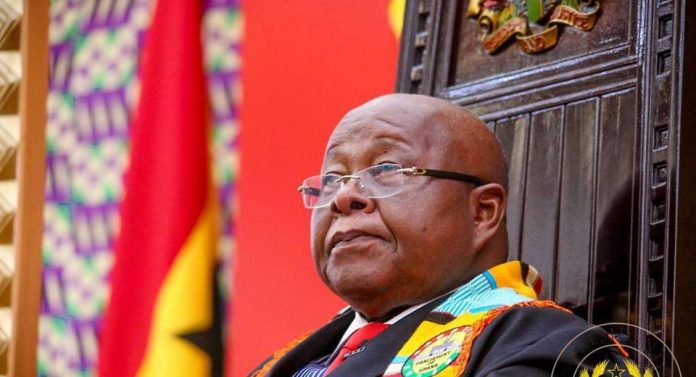 The Speaker of Parliament Rt. Hon. Prof. Aaron Michael Oquaye on Thursday suspended parliamentary proceedings for one hour and directed the Leadership of the House to immediately summon senior officials of the Ministry of Fisheries and Aquaculture Development to appear in Parliament to answer three parliamentary questions.

This follows the failure of the Minister for Fisheries and Aquaculture Development
Hon. Elizabeth Afoley Quaye (MP-Krowor) and her Deputy Mr Francis Ato Cudjoe to appear before the House to answer three questions listed in the Order Paper for the day.

Giving this directive on the floor of Parliament, the Speaker lamented that the continuous snubbing of Parliament by ministers and their deputies, some of whom are members of the Parliament weakens the legislature greatly.

Hon. Anno-Dompreh wanted to ask the sector Minister when the contractor involved in the restocking of selected dams and dugouts with four million catfish and fingerlings would be paid and also to ask the Minister what steps are being implemented to ultimately ensure that there is a waiver on tax on aquaculture input materials as a boost to the industry.

Hon. Nelson Dafeamekpor on the other hand was to ask the Minister when the Tongor-Dzemeni fish landing site will be constructed.

Though the Majority and Minority Leaders of the House also expressed their displeasure of the absence of the Minister and her Deputy and called for adjournment of the House to 10:00 hours on Friday, the Rt. Hon. Speaker insisted that the officials should be summoned to the House for failing to appear without a formal communication.

Prof Oquaye also directed the leadership of Parliament to communicate to the Ministers to attach a high level of seriousness to the work of the House.