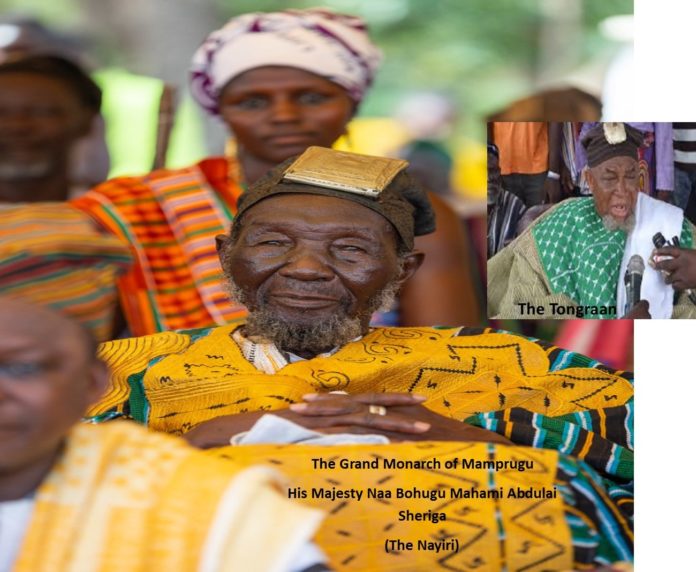 The Grand Monarch of Mamprugu, the Nayiri— Naa Bohugu Mahami Abdulai Sheriga— has mailed a very strong warning to the Paramount Chief of Talenteng, the Tongraan, over “some misinformation” he says possibly will mislead the public.

The Tongraan, who goes by the royal title Naab Kugbilsong Nanlebegtang, wants to take over installation of divisional chiefs in five areas in the Talensi District from the Nayiri who installed him as a paramount chief in 2015. The areas include Namoalug, Digaare, Bapella, Tolla and Nuungu.

He cites Bongo, Nangodi, Sakoti, Bolgatanga and Zuarungu in that three-page document as other traditional areas in the region where the Nayiri installs paramount chiefs but does not appoint divisional chiefs, and, then, asks: “Why should this be happening in Talensi?”

That petition ended just the way it started. The Tongraan, in the opening paragraphs, said “a worrying and dangerous situation…is brewing up” in Talensi and, in conclusion, asked that “the right thing” be done “to avoid a potential conflict” in the area.

The Nayiri’s set-the-records-straight reply came with a firm warning to his underling: “Your petition contains some misinformation which is likely to mislead the public.”

The installation of a long-serving Management Accountant at the University of Ghana, Bernard Bade Bugre, as the Chief of Namoalug was the Tongraan’s main concern in that letter. The document was ‘aflame’ with a call for the Nayiri to suspend “all ceremonies leading to the enskinment” of the Chief of Namoalug until his wish had been granted.

“No Tongrana has ever installed or enskinned a Namualugu [another way of spelling Namoalug] regent or chief. You may remind me if in any case my memory failed me,” countered the Overlord.

He added: “In respect of your unquestionable mandate, [your claim] to enskin all chiefs in the Talensi Traditional Council cannot be wholly true. By authority vested in the Tongo skins, the Tongrana is mandated to [install] all chiefs whose allegiance is directed to the Tongo skins. That mandate, if I may remind you, is derived from the Nayiri.”

The Nayiri explains why Tongraan’s wish cannot be approved

The widely revered Ruler of Mamprugu makes it clear in his reply that the Tongraan cannot install chiefs in the five areas of interest mentioned in his petition because “they are traditionally senior to the Tongo skins”.

“The skins of Namualugu, Nungu, Bapela, Tolla and Digaare are directly under my skins (Nayiri) and have been so much longer before the Tongo skins which, to begin with, were under the enskinning authority of the Kuru-Naba. Consequently, but for the elevation of Tongo skins to paramountcy by my predecessors, the above-mentioned skins are traditionally senior to the Tongo skins.

“It is rather disturbing or unfortunate that you have taken a rather narrow view of the traditional setup by comparing the Talensi Traditional Area with your brothers— Bo-Naba, Sakuti-Naba, Nango-Naba and Zuarungu-Naba in the Upper East Region in your efforts to justify your desire to enskin from the five communities. The traditional setup far outdates the administrative one,” the Nayiri explained.

In reality, the Chief of Namoalug is so highly regarded at Nalerigu— because of a direct, ancestral blood bond between Nalerigu and Namoalug— that, whilst all other chiefs sit on the bare ground to be enrobed during the installation process, he sits on a pillow made from a hide. And he has a unique place reserved for him to be seated during any gathering of chiefs at Nalerigu. The current Chief of Namoalug, Nab Kolsong Na-Laam Nyuurib, was, in accordance with traditionally accepted conventions, installed by the Nayiri through one of the Elders of the Mamprugu Traditional Council, Mba Sakpari, at Nalerigu.

The Nayiri put it back to the Tongraan in his reply: “On the issue of the Namualugu chieftaincy matter which is the subject of your letter, I am at a [loss] as to how the performance of a [traditionally] mandatory function, as was performed by my elder Sakpari, could be a source of worry and danger to the Talensi Traditional Area. The installation of regents and subsequent enskinment of chiefs for Namualugu have always been done by the Nayiri since time immemorial with all your predecessors of the Tongo skins and none of them had ever raised the issue of danger and worry.”

Starr News learns there are some other traditional areas in Ghana and beyond where the chieftaincy skins also come directly under the Nayiri’s authority.

“For example, I have Kug-rana, Dian-Dana, Sayoo-Naba and Jaagban-Dana in the Wungu Traditional Area and Namang-Rana, Lukula-Naba and Soo Namoo-Rana in the Soo Traditional Area. The presence of these chiefs does not pose a threat to the peace and security of these traditional areas. Why so in your jurisdiction?” the Nayiri questioned the Tongraan.

The Grand Monarch concluded: “Please, Tongo-Rana, what we have today is our heritage and we cannot re-write or re-invent it. So, in the interest of peace and development of our people, I urge you to endeavour to maintain and cherish what we have.”