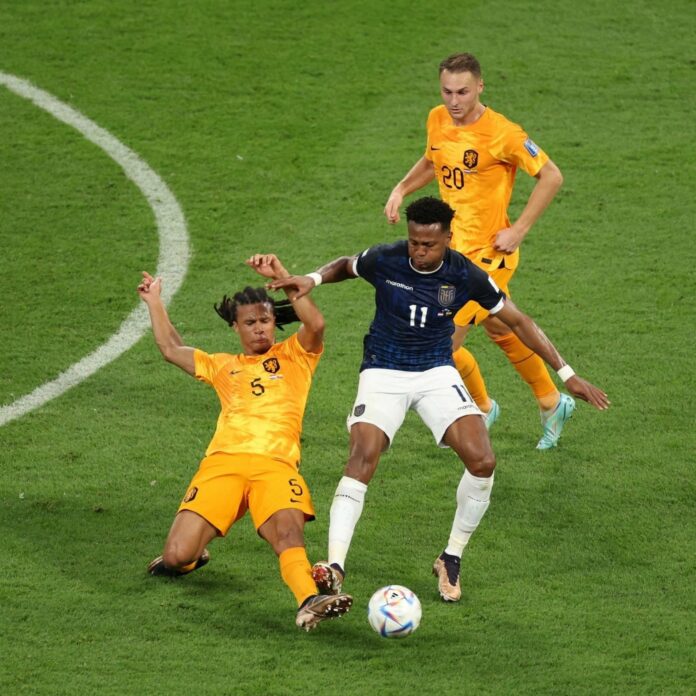 La Tricolor of Ecuador came from a goal down to share honours with Oranje of Netherlands in their second group game of the 2022 FIFA World Cup tournament in Qatar on Friday evening.

The two teams are now level on four points at the top of Group A after Cody Gakpo’s stunning early strike was cancelled out by Enner Valencia early in the second half of an entertaining draw that eliminated hosts Qatar from the 2022 World Cup.

The Oranje had been made to wait for their breakthrough against Senegal but were in front within six minutes here, their two goalscorers from the first game combining to devastating effect. Davy Klaassen was sharp to pick up a loose ball and find Gakpo, who unleashed a stunning left-foot shot into the top corner of Hernan Galindez’s goal.

Any thoughts of a straightforward Netherlands win were swiftly dispelled as Valencia’s effort was headed away by Virgil van Dijk, the Ecuador captain looking his side’s most likely route back into the game.

Valencia’s cross caused a moment of panic in the Netherlands penalty area, Michael Estrada close to getting on the end of it, before Andries Noppert pushed away another Valencia effort at his near post.

Ecuador had the ball in the net seconds before the break, Pervis Estupinan’s low shot turned in by Angelo Preciado only for the offside Jackson Porozo to be adjudged to be blocking Noppert’s line of vision.

The South American side were not to be denied and were finally back on terms three minutes into the second half. Estupinan’s low shot was well saved by Noppert but Valencia, played onside by Nathan Ake, reacted quickest to prod in the rebound.

Ecuador continued to look the more likely scorers and were close to taking the lead just before the hour as Gonzalo Plata’s shot smashed off the underside of the bar.

That was as close as either side came to a winner, the most significant late action the departure of Valencia on a stretcher after he had aggravated an ongoing knee injury.

Trump joins Mahama, others on unenviable list of one-term presidents