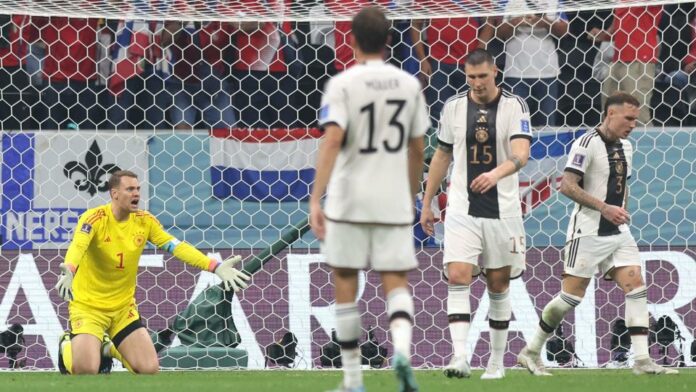 German machines suffered their second consecutive group stage elimination for the first time in the history of the FIFA World Cup tournament in Qatar despite winning their last group game against Costa Rica.

Die Mannschaft failed to progress from their group for the second successive World Cup despite concluding Group E with an entertaining 4-2 win against Costa Rica.

The four-time winners, who were eliminated at the first hurdle as holders at Russia 2018, scored three times in the final 17 minutes to finally see off a Costa Rica side who held their own ambitions of progressing to the round of 16. However, Japan’s win against Spain in the other game meant those two sides qualified at the expense of Germany.

Needing to win to have any chance of staying in the tournament, Germany started at breakneck speed with Jamal Musiala particularly prominent early on. Thomas Muller headed wide Joshua Kimmich’s cross but less than a minute later Germany were in front, Serge Gnabry applying a clever flicked header to David Raum’s cross.

If that looked likely to herald a glut of Germany goals, Keylor Navas had other ideas, denying Leon Goretzka and Kimmich while Gnabry curled just wide as the European side controlled the game without being able to add to their lead.

Germany nearly paid the price as halftime approached, David Raum and Antonio Rudiger making a mess of a clearance to leave Keysher Fuller with only Manuel Neuer to beat, the Germany goalkeeper sticking up a hand to turn the ball over the bar.

With news coming through that Japan had scored twice to take the lead against Spain, Germany’s hopes were fading fast, and when Neuer parried Kendall Waston’s header and Yeltsin Tejeda smashed in, they looked to be all but over.

Costa Rica, in contrast, were revived, and they were in dreamland with 20 minutes left as Juan Vargas scrambled in from a free-kick.

That goal meant Japan and Costa Rica were heading through, but the celebrations had barely died down before Niclas Fullkrug had played in fellow substitute Kai Havertz to level at 2-2.

Germany continued to pour forward, Navas saving from Fullkrug with his face, but the goalkeeper was beaten for a third time as Gnabry set up Havertz for his second of the evening.

Fullkrug then tapped in a late fourth, awarded after a VAR check, but Germany’s fate was already sealed.

The Germans went out of the competition with their tonight’s opponent with group winners, Japan playing Croatia and Spain facing Morocco in the round of 16 stages of the 2022 FIFA World Cup tournament in Qatar.