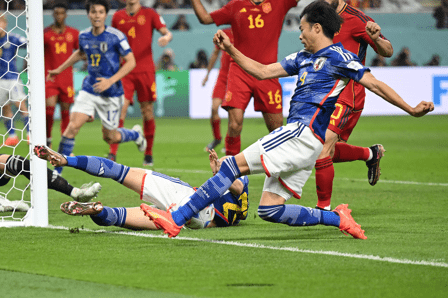 The Samurai Blues of Japan beat European giant Spain on Thursday evening to go top of Group E with a 2-1 comeback win in their last group game.

The Asians came from behind to seize another shock victory over a European power as second-half goals from Ritsu Doan and Ao Tanaka downed Spain and sent Germany crashing out of the 2022 World Cup.

But there was more than a hint of controversy about Japan’s second goal, with replays appearing to show Kaoru Mitoma had taken the ball over the left byline before cutting it back for Ao Tanaka to tap home.

After a lengthy referral to VAR, the goal was surprisingly awarded and a dispirited Spain could not muster an equalizer.

La Roja were in cruise control at the break after Alvaro Morata headed home Cesar Azpilicueta’s cross for his third goal in three group games.

But half-time substitute Ritsu Doan transformed the momentum two minutes after coming on when he seized on a loose pass from Spain goalkeeper Unai Simon and drilled home the equalizer, before Tanaka’s close-range strike earned Japan another stunning win after upsetting Germany in their opener.

Japan will face Croatia in the round of 16 stages of the 2022 FIFA World Cup tournament in Qatar whiles Spain takes on Morocco who finished top of Group F.