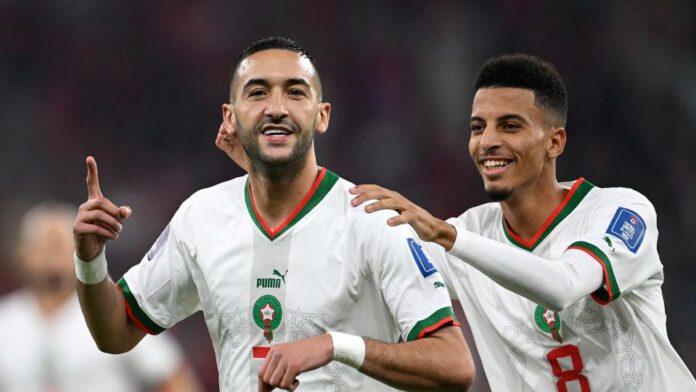 The Atlas Lions of Morocco topped the group stages of group F of the ongoing 2022 FIFA World Cup tournament in Qatar with a 2-1 win on Thursday evening over Canada.

The African country advanced to the World Cup knockout stage for the first time since 1986 as they defeated Canada 2-1 to not only qualify for the Round of 16 but win Group F.

Belgium’s failure to score against Croatia means they are out, while Morocco finished on top and Croatia in second. It’s scenes for the African nation, whose first-half goals from Hakim Ziyech and Youssef En-Nesyri paved the way for all three points.

At the other end, Canada once again put forth a spirited effort but came away with nothing, punished for their defensive mistakes yet again. Their lone strike came just before the half via an own goal from Naif Aguerd who deflected a Sam Adekugbe cross into the back of the net.

Les Rouges come away with no points at a World Cup for the second time in as many appearances, while Morocco are on top and see their way through to the knockout stage.

Morocco will face the second placed team in Group E made of Spain, Germany, Japan and Costa Rica at the round of 16 stages.

Ghana plans to issue $3.9 billion in bonds in first quarter