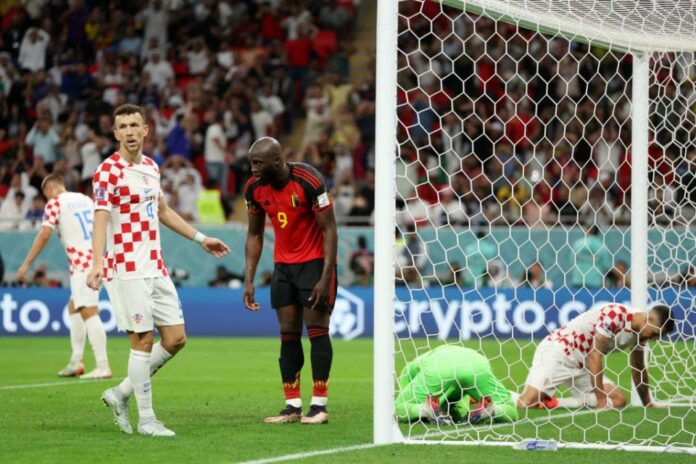 The Red Devils of Belgium left powerless as they crush out of the 2022 FIFA World Cup tournament in Qatar at the group stages after finishing third in the last edition in Russia 2018 after a goalless draw against runners up Croatia on Thursday evening.

Their top striker, Romelu Lukaku passed up three great opportunities in a goalless draw that sent Croatia through as Group F runners-up behind Morocco.

Having kicked off in third place, Belgium knew only a win would guarantee their progress but in the end a side who finished third at Russia 2018 and who are ranked second in the FIFA rankings could not force a win and failed to qualify from their group for the first time since 1998.

Belgium’s already slender hopes nearly narrowed further within 10 seconds as Ivan Perisic flashed a shot wide straight from kick-off, although Belgium then created two chances of their own.

Croatia, however, were looking the more dangerous side and thought they had a penalty as Carrasco felled Andrej Kramaric. After a long VAR check, however, the decision was overturned for offside.

With Morocco leading against Canada, Belgium knew they were facing elimination and Roberto Martinez brought on Lukaku at the break.

After a brief Belgium flurry, Croatia continued to look the side most likely to force a breakthrough, Thibaut Courtois saving from Mateo Kovacic, Marcelo Brozovic and Luka Modric in quick succession.

With Belgium’s need increasingly urgent, De Bruyne’s pass set Carraso racing into the penalty area and, though Josip Juranovic made a fine block, the ball broke for Lukaku, whose shot struck the post. The substitute then nodded over with the goal at his mercy, although replays suggested the ball was already out of play.

As time ran out for Belgium and with a raft of attacking players thrown on, Thomas Meunier’s fierce shot bounced wide off Lukaku who then failed to turn in Thorgan Hazard’s cross, and with that Belgium’s last chance had gone.