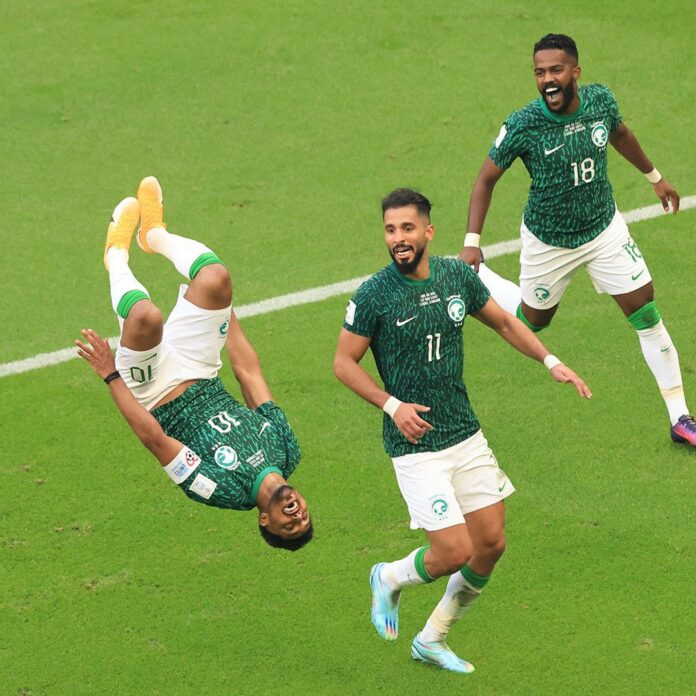 The Green Falcons of Saudi Arabia were in a high spirit as they came from a goal down to record the country’s greatest ever world cup win over Lionel Messi’s Argentina on Tuesday evening in Qatar.

Argentina raced into an early lead against Saudi Arabia as they kicked off their highly anticipated 2022 World Cup campaign.

Captain and superstar Lionel Messi, on what is likely to be his final global tournament, tucked away a penalty in the ninth minute to put one of the favourites on their way.

But the Albiceleste were left frustrated as three further ‘goals’ in the space of 12 minutes were all ruled out for offside.

First Messi tucked away a trademark finish across the goalkeeper before VAR ruled the maestro had marginally mis-timed his run.

Then Lautaro Martinez clipped a lovely finish over the advancing Mohamed Al-Owais, before rounding the Saudi goalkeeper and slotting home, but both were chalked off.

Saudi Arabia captain Salman Al-Faraj was forced off with an injury before the interval as they tried to prevent Argentina equalling the world record for the longest unbeaten run.

On the 95th minute mark, Saudi keeper Mohamed Al-Owais came out to punch a ball away and clobbers his defender, Yasser Al-Shahrani, on the way through. Al-Shahrani lands heavily and could not continue.

The game finished 2-1 to the Arabians led by Harve Renard.

Argentina must beat México and Poland in their remaining two games to have a chance to play in the knockout round of the 2022 FIFA World Cup tournament in Qatar.