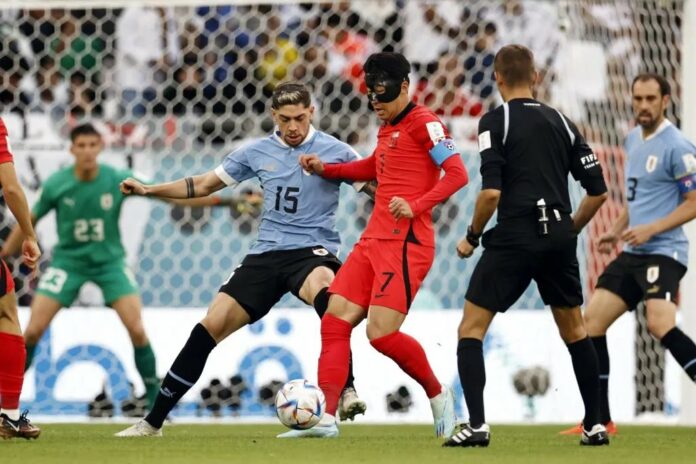 La Celeste of Uruguay drew goalless against the Taegeuk Warriors in their opening game of the 2022 FIFA World Cup tournament in Qatar on Thursday evening.

The two teams failed to find the back of the net in the game despite creating a lot of great and clear chances in the game.

Uruguay vs South Korea was the first World Cup game this century with zero shots on target.

Uruguay hit the post twice as they failed to register a third World Cup win in three matches against South Korea in their Group H opener.

Veteran defender Diego Godin, in his fourth World Cup, thumped a header against the base of a post from a corner before half-time, while a thunderous late strike from Federico Valverde also found the woodwork.

Hwang Ui-jo also spurned a glorious opportunity for South Korea, in their 10th consecutive finals appearance, when he fired over the bar from close range in the 34th minute.

Tottenham’s Son Heung-min, sporting a protective mask after facial surgery, and Liverpool’s Darwin Nunez also curled efforts wide as neither side could register a single official shot on target – a World Cup record.

Uruguay’s next match is against Cristiano Ronaldo’s Portugal on Monday, November 28, while South Korea face Ghana on the same day.