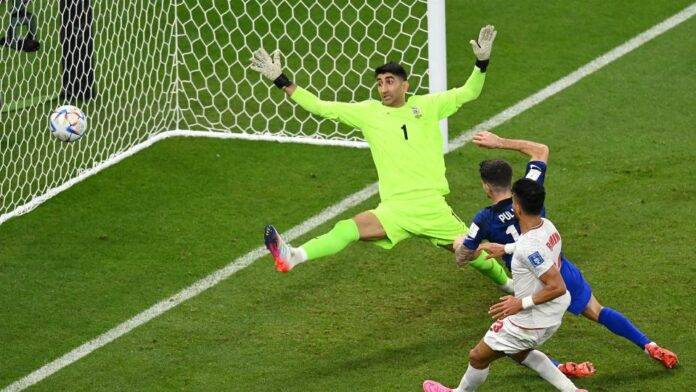 ‘Captain America’ Christian Pulisic carried the United States of America on his shoulders to the next stage of the 2022 FIFA World Cup tournament in Qatar with the winner against Iran on Tuesday evening.

The English Premier League side Chelsea FC player put his career on the line with a very brave finish which eventually took him out of the game after crushing into the goalkeeper before his goal.

It was tense, it was nervy, and it was gut-wrenching at times for U.S. fans, but the United States advanced to the knockout stage of the 2022 World Cup by defeating Iran 1-0 in a must-win match.

Needing simply a victory to advance, Christian Pulisic delivered the biggest moment of his USMNT career, scoring in the 38th minute and injuring himself in the process. The U.S. star put his body on the line to deliver the moment the U.S. needed to advance, taking a knee from Iran goalkeeper Alireza Beiranvand to the gut in the process.

Pulisic was replaced at halftime, and the U.S. hung on for dear life the rest of the way, with Iran throwing numbers forward as time ticked off the clock.

Nine added minutes at the end of regulation time made things even more tense, but Iran failed to produce the goal they needed.

The victory affords the U.S. a chance to play in the Round of 16, where they will meet Group A winners Netherlands on Saturday. Advancing past the group stage was the minimum goal for the USA, and with this gutsy win, they’ve cleared that bar.

There are still plenty of questions to ask about the U.S. attack, which produced just two goals through the three group-stage matches, but defensively, they were sensational to concede just one goal, and none from open play.

Crocodile tears: How Rawlings’ ‘enemy’ Akufo-Addo became his friend when he...