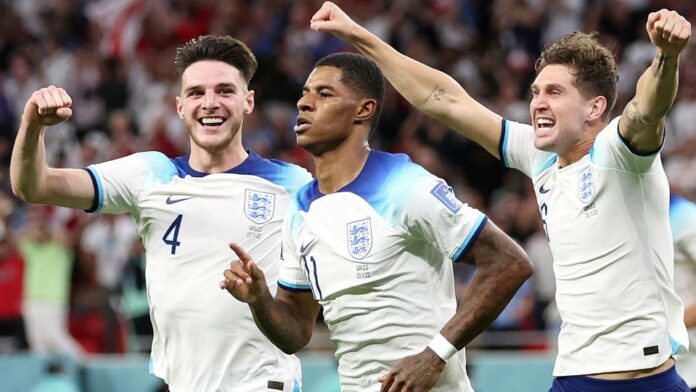 The Three Lions of England on Tuesday night beat their neighbours the Dragons of Wales in their last group game of the 2022 FIFA World Cup tournament in Qatar to book a clash against the Teranga Lions of Senegal.

Manchester United FC star Marcus Rashford and Phil Foden made the most of their elevation to England’s starting line-up as they played starring roles in a dominant 3-0 World Cup win over Wales.

The Three Lions attacker who made his first start of the 2022 FIFA World Cup tournament hammered home a superb 50th-minute free-kick, won by Foden after a jinking run, and his Manchester City counterpart was on target a minute later.

Rashford drilled his third of the tournament through the legs of Wales goalkeeper Danny Ward to make sure of top spot in Group B and set up a last-16 showdown with Senegal.

Wales’ first World Cup finals appearance since 1958 ended with a solitary point to their name and captain Gareth Bale departing through injury at halftime.

Rashford and Foden were selected amid four changes made by Gareth Southgate and each were to the fore as Wales dug in doggedly during the first period.

The best opening of the opening 45 minutes fell to Rashford in the early stages when England captain Harry Kane dropped deep to thread a fine throughball into his path. Ward, who was playing in place of the suspended Wayne Hennessey, stood firm.

England gaffer, Gary Southgate started Foden and Rashford on the right and left flanks respectively but switched them for the start of the second half and it paid immediate dividends.

Foden darted infield to send Wales defenders scrambling and he was brought down by a combination of Joe Roden and Connor Roberts. Rashford arrowed a fabulous strike over the wall and Ward wrong-footed himself by stepping to his right.

Kane, the Golden Boot winner in 2018, is yet to get on the scoresheet at this tournament but he collected his third assist of this tournamen after Rashford harried Ben Davies into an error and fed his captain to cross for the onrushing Foden at the far post.

Southgate was then able to ring the changes with an eye on Sunday’s meeting with Senegal and one of the replacements, Kalvin Phillips, released Rashford down the right. He still had plenty to do but made light of Roberts’ attentions before nutmegging Ward.