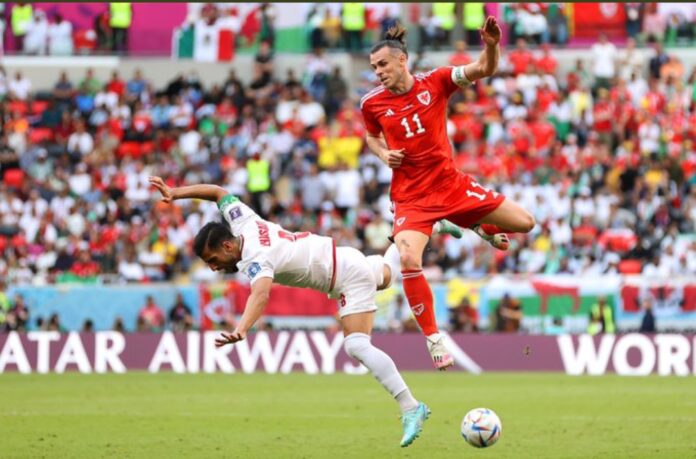 Former Real Madrid star Gareth Bale’s Wales Crumple at the death of their second game of the 2022 FIFA World Cup tournament in Qatar against Iran on Friday evening.

Iran were hammered 6-2 by England in their opening game but were a side transformed after head coach Carlos Queiroz made five changes.

A key moment arrived in the 86th minute, when Wales goalkeeper Wayne Hennessey was sent off for a brutal challenge on Mehdi Taremi.

Iran had dominated the second half up until that point, and Cheshmi and Rezaeian finally made it count deep into stoppage time to prompt emotionally charged celebrations.

Kieffer Moore, into the Wales 11 after impressing from the bench in the 1-1 draw against the USA, almost gave his team a 12th-minute lead from Connor Roberts’ cross. That was as good as things got for Gareth Bale and his colleagues in an attacking sense.

Ali Gholizadeh thought he had opened the scoring, only to have needlessly strayed offside when tapping home Sardar Azmoun’s pass.

Bayer Leverkusen forward Azmoun was back from a calf injury and proved a constant menace to Wales. He broke free early in the second half and thumped a shot against the post. Gholizadeh retrieved the loose ball and clattered the other upright from 25 yards.

A remarkable sequence concluded with a prone Hennessey saving from Azmoun’s header on the rebound, and Wales’ No1 was at full stretch to save superbly from Saeid Ezatolahi’s low drive.

A remarkable sequence concluded with a prone Hennessey saving from Azmoun’s header on the rebound, and Wales’ No1 was at full stretch to save superbly from Saeid Ezatolahi’s low drive.

Hennessey was busy, in large part because of Wales’ vulnerability on the break, and he charged from his ground to take down Taremi four minutes from time. It was a surprise it took a VAR intervention to upgrade his punishment to a red card.

Danny Ward came on in goal, with Aaron Ramsey sacrificed, and the Leicester City goalkeeper had no chance when Cheshmi seized upon a loose ball to thrash home from 20 yards. Tireless right-back Rezaeian charged forward on the counter-attack to coolly make sure of the points amid delirious scenes at Ahmad Bin Ali Stadium.