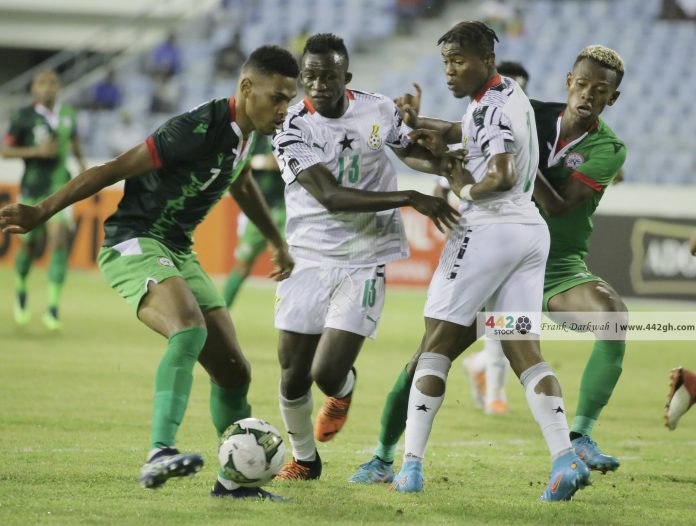 Ghana beat Madagascar 3-0 in their 2023 Africa Cup of Nations first qualifier against Madagascar on Wednesday night at the Cape Coast stadium.

Ghana started the game very strongly and dictated the pace of the match to put pressure on the visitors who couldn’t come out from their own area.

Jordan Ayew and Abdul Baba Rahman had a great time in the first half and created most chances on the flanks for the Black Stars from the left side of attack.

Youngster, Abdul Fatawu Issahaku had two moments in the first half but failed to produce a good outcome with the chances that came his way.

He struck the side net with a sweet left-footed strike from just inside the right side of the box.

Andre Ayew thought he had won a spot kick for Ghana when he was brought down inside the box but only for the referee to give a free-kick outside the box.

The first half ended goalless despite Ghana’s total dominance.

The Black Stars continued from where they left off in the second half with commanding display.

Eight minutes into the second half, Youngster Felix Afena Ohene-Gyan somehow found Mohammed Kudus in the box after Andre Ayew’s dummy to smash into the top center to make it 1-0 to the Home team.

Two minutes later, Afena-Gyan flicked Gideon Mensah’s cross into the back of the net to make it 2-0 to Ghana.

Kudus thought he had scored again when he hit the back of the net only for the flag to up for offside.

Andre Ayew, Abdul Fatawu Issahaku and Afena-Gyan were all substituted with 15 minutes to go with Antoine Semenyo, Osman Bukari and Daniel Kofi Kyereh taking their places.

On the 85 minute mark, substitute Osman Bukari added his name on the score sheet after rounding the goalkeeper before slotting home the third to make it 3-0.

Semenyo nearly got his moment when he forced his way through the defenders but was adjudged to have fouled his opponent.

Ghana won 3-0 and will face Central Africa Republic on Sunday in their second AFCON qualifier.

Ghana will after the Central African Republic game travel to Japan for a four nation tournament.

Bawumia is the best on Ghana’s political scene today – Kofi...