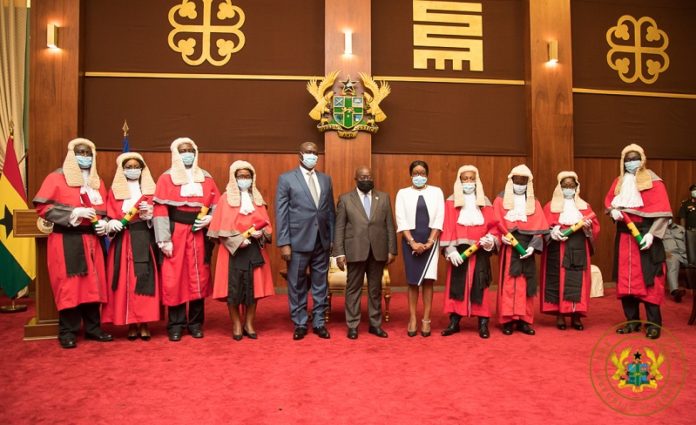 President Nana Addo Dankwa Akufo-Addo says Government, through the Administrator of the District Assembly Common Fund, is constructing 98 Courts and bungalows for Judges in all 16 Regions of the country.

According to President Akufo-Addo, Government has also taken note of the inadequate numbers of courts in various parts of the country, resulting in citizens traversing long distances in order to gain access to the country’s courts.

“For example, there is no Court between Adjabeng and Amasaman in the Greater Accra Region, neither is there a Court between Adum in Kumasi and Asante Bekwai or Obuasi in the Ashanti Region. Indeed, it has been barely nine (9) months since I commissioned the three-storey Court Complex at Frafraha, in Adenta, Accra, and I am reliably informed that there are already some three thousand cases pending there,” he said.

To the 16 Justices, the President reminded them that the dispensation of justice requires that application of the laws of the land must occur, in the hallowed words of the judicial oath, without fear or favour, affection or ill-will, that is, without recourse to the political, religious or ethnic affiliations of any person before you.

“When a citizen falls foul of the law, that citizen, high or low, must be dealt with accordingly, and the law enforcement agencies, including you, our new judges, must ensure this is done. That is the true meaning of the concept of equality before the law,” he said.

To assist them on this path, President Akufo-Addo stated that his Government, since his assumption of office, has, since my assumption of office, introduced a number of policy measures to help bridge the technology-gap, explaining that they are necessary to shore up the nation’s reputation as a country governed in accordance with the rule of law.

“That is why, last year, I launched the e-justice system, which is designed to leverage technology in the delivery of justice. I encourage all of you to take full advantage of the e-justice system, to expedite the conduct of cases that come before you, and in the management of the Court. The transparent and efficient delivery of justice builds confidence in citizens, businesses and the investor community,” he added.

New Justices of the High Court

“It is, therefore, critical for the growth of the nation that the High Court commands the respect of the people by the quality of its justice, as well as by the comportment of its judges,” he added.

Why Ghana’s Central Bank revoked licenses of 23 Savings and Loans...