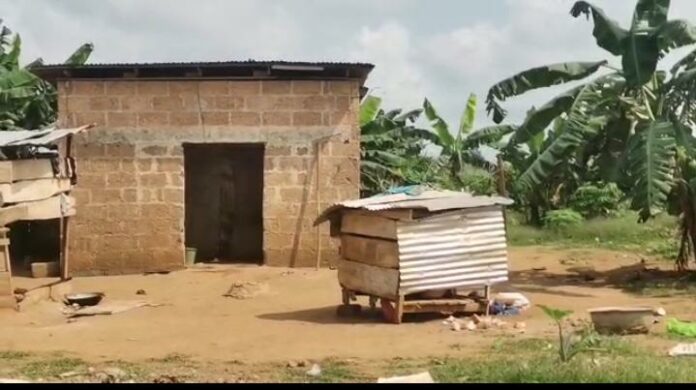 A 48-year-old man shocked residents of Asuofia Asamang in the Atwima Nwabiagya North District of the Ashanti Region after he shot and killed his partner in front of her children for allegedly threatening to divorce him.

The suspect Bashiru Nyaniba, on Sunday dawn opened fire at the victim, Ama Vida during an altercation between the couple.

Family members confirms the suspect and the victim they had settled a frosty relationship until the incident occurred.

Their 14-year-old daughter, Comfort Kolani narrated how efforts to save her mum, Ama Vida yielded no results as she watched her father pull the trigger.

“I told my dad not to shoot my mum. I tried saving her but I couldn’t. I had to run for cover because he had turned his anger on me. I could have been the next victim. My mum is the only one who takes care of us and now and life will be unbearable for me and my siblings”, the teary-eyed girl said.

The family of six lived in a single room apartment in a secluded area at Asuofia New Site. Blood stains were spattered on the ground when dailymailgh.com visited the crime scene.

But the police in the Ashanti Region shockingly announced that the suspect had died hours after he was rearrested and rushed to the hospital.

He is reported to have attempted suicide after taking a poisonous substance hours after committing the crime.With autopsy yet to be conducted the police are not ruling out a foul play as they suspect Bashiru may have been lynched.

“In the morning around 10 a.m., we had a call that the man had been pursued by some angry mob to Dabaa where they allegedly subjected him to severe beatings… unfortunately this morning we are learning that he has also passed on”, said spokesperson for the Ashanti Regional Police Command ASP Godwin Ahianyo.

“We are also hearing that he took weedicides but this is an allegation. We will have to conduct an autopsy to find out whether his death was as a result of the beatings or the weedicides he consumed the autopsy will unravel all these[details]”, he added.

The two bodies have since been deposited at the Komfo Anokye Teaching Hospital. Ama Vida’s untimely death adds to the increasing spate of male violence against women in Ghana.

A 2020 report show that rape and domestic violence remain a serious problem in the West African country.