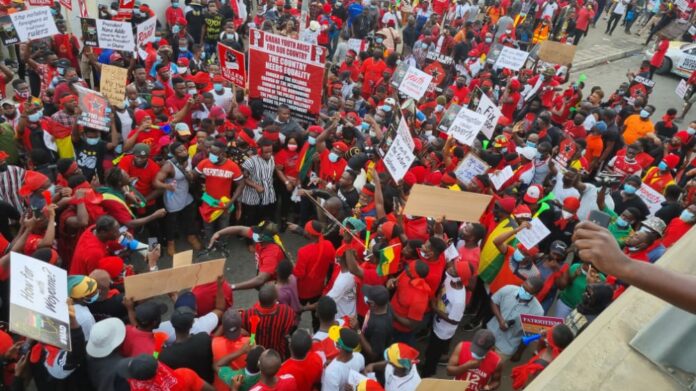 Hundreds of Ghanaians have taken to the streets of the national capital, Accra Wednesday, piling pressure on the government for good governance.

Clad in red, yellow green and black outfits the protesters, wearing masks and keeping distance from one another, converged at the Obra Spot near the famous Kwame Nkrumah Circle at about 6 a.m.

Some waved banners reading, “Stop tribal discrimination”, “Stop the cathedral and use the proceeds to build hospitals, schools, roads and comfortable houses for the police”, “Ghanaians deserve better.”

The protest is expected to be climaxed at the Black Star Square.

The Akufo-Addo administration has been accused of managing a bad economy, already worsened by the impact of COVID-19 pandemic. It has been rocked with a number of labour agitations with University teachers, the latest to strike.

Also, conveners of the movement have pledged to ensure that all protestors adhere to all the Covid-19 safety protocols.

In the last few months, Ghanaian youth have taken to social media to demand accountability, good governance, and better living conditions from government.

The FixTheCountry advocacy which began in May has garnered huge support since campaigners, largely the youth, started highlighting some of the inadequacies in the country.

In its response to the aggrieved youth, government outlined initiatives it has implemented, including the Nation Builders’ Corp (NABCO), National Youth Entrepreneurship and Innovation Plan (NEIP) to build the human capital in the country.

But the protestors say the impact of these initiatives has not been felt on the ground.

Earlier attempts by the campaigners to embark on a street protest were foiled by the police through a court action but the campaign continued unabated online.

Subsequently, the court dismissed the injunction explaining that the application is moot because, May 9, the date for the protest, which the police did not agree to, has long elapsed.

The Conveners of the campaign then finalised details and scheduled the first protest march for August 4, 2021.