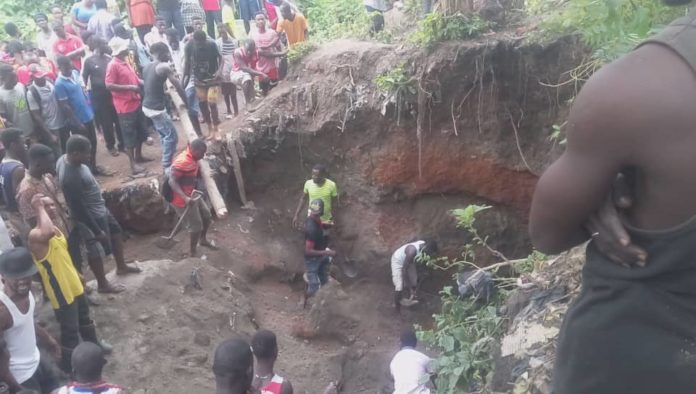 A 16-year-old boy has died after he got drowned in an abandoned illegal mining pit at Domi-Keniago, a community in the Manso Adubia District of the Ashanti Region.

The victim named as Richard Bobie, had joined his 66-year-old grandfather and three others to his cocoa farm when the unfortunate incident happened at about 12:30pm on Monday, April 13, 2020.

Owusu Acheampong Raymond, who narrated the incident to Dailymailgh.com said his grandson, who was tasked to prepare food in the farm suddenly could not be traced, hence conducted a search for him on the farm.

“I later saw my grandson’s dresses and slipper closed to the abandoned pit which was about a few meters away from the farm”, the retired headmaster recounted in tears, adding: “He doesn’t know how to swim. I suspect he may have slipped and fell and so I alerted the police“.

Efforts by local divers to rescue the victim yielded no results.

“He was found afloat yesterday [Tuesday] when we returned to the scene and so the body was recovered but he was declared dead by medical officers at the St Martin’s Hospital,” Acheampong said.

The remains of the victim has since been deposited at the same hospital morgue for preservation and autopsy.

The deceased until his death was a final year student of the Keniago D/A Junior High School.

Mining pit collapses; kills one, another in critical condition

At the time of filing this report, Police in the area were also investigating a similar incident at Manso Datano. It involved four persons who got trapped in an illegal mining pit at a place called Offinho, near Manso Afraso.

The incident which occurred at about 1:00pm local time left one person dead.

One other who survived the accident is in critical condition and is being monitored by medics at the Future View Hospital.

The body of the deceased named only as Alex has since been deposited at the St. Martin’s Catholic Hospital morgue at Manso Agroyesum for identification and autopsy.